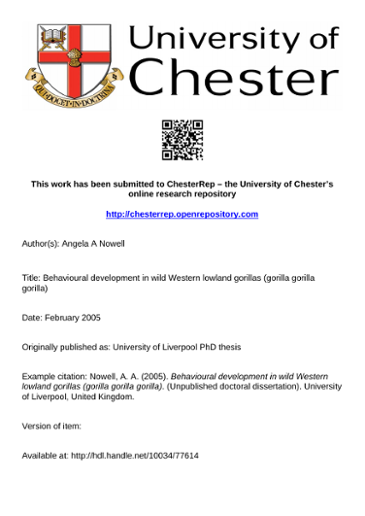 Behavioural development has received little attention in primates, despite having important influences on infant mortality, interbirth intervals, and therefore, growth of populations. Gorillas have long developmental periods, exhibit strong maternal bonds and integrate into intricate social systems, making them an ideal species in which to investigate non-human primate development. Gorillas exist across a range of habitats, and differences in behaviour, both within and between species reflect socioecological differences, for example, in the availability and distribution of food. Consequently, by using gorillas as a model, opportunities also exist to investigate environmental constraints on the development of independence. This study provides the first detailed analysis, with reference to ecological factors, of the development of behavioural skills and relationships in wild western lowland gorillas (Gorilla gorilla gorilla). Behavioural development of western lowland gorillas is then compared with published accounts of development in mountain gorillas (Gorilla beringei beringei) to determine the extent to which differing ecology influences behaviour. The study was conducted at Mbeli Bai in the Republic of Congo, a large, marshy clearing, visited by gorillas predominantly for feeding purposes. Data were collected using scan, focal, all-occurrence and ad libitum sampling methods from 58 gorillas below 8 years of age. Spatial relationships, suckling, and the nature of interactions involving immature individuals were analysed. The distribution of time between different behaviours by immatures, and the development of independent feeding and travelling behaviour was also investigated, and all were tested for differences as a result of immature age, sex and social group, or the mother's parity. Towards the end of infancy, individuals showed competent feeding behaviour in the bai. However, western lowland gorillas were not weaned until the juvenile period, and until this time, close association was common between mothers and offspring. With increasing independence from the mother there was limited investment in relationships with other individuals, and instead, a greater emphasis was placed on developing skills through play, alloparenting and agonistic interactions. When results were compared with those of mountain gorillas, there was evidence of increased investment in relationships, particularly with the silverback, by immature mountain gorillas, which was assumed to reflect lower rates of natal dispersal by mountain gorillas, and the greater likelihood that relationships with individuals in the natal group could prove useful in the future. Suckling and close proximity to the mother continued until later ages in western lowland gorillas, resulting in clear differences between them mountain gorillas in the duration of investment by mothers. More frugivorous western lowland gorillas required increased levels of investment by the mother before independence could be achieved, demonstrating the effect that resource availability can have on behavioural development in species where resources are widely and unpredictably dispersed.