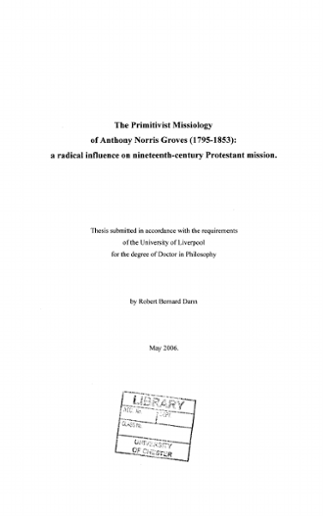 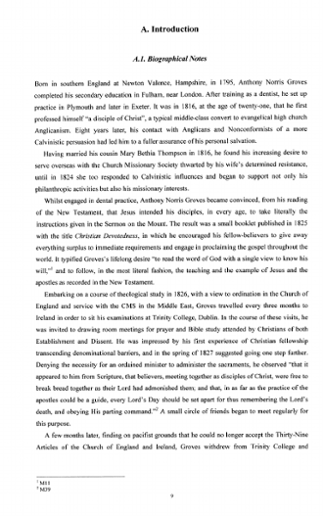 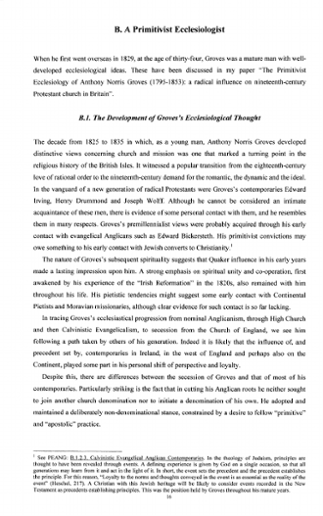 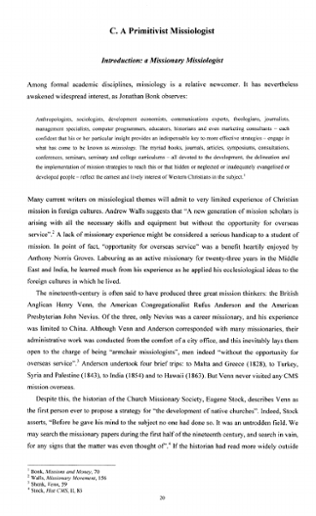 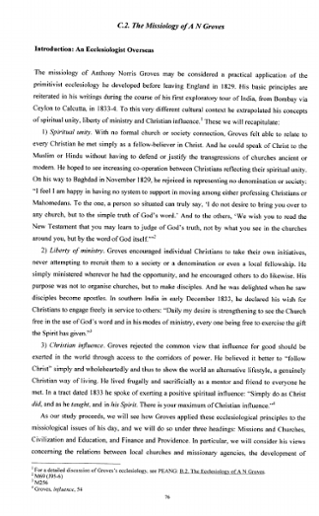 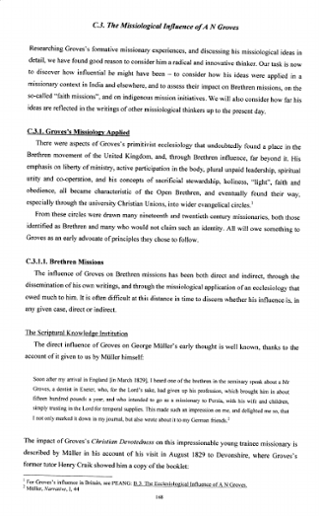 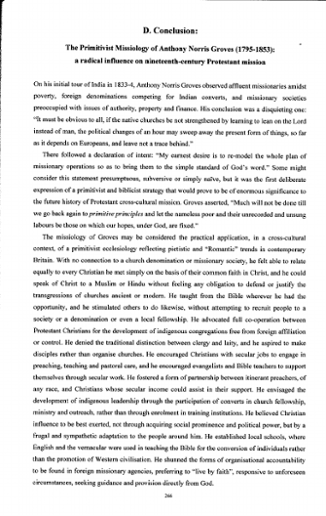 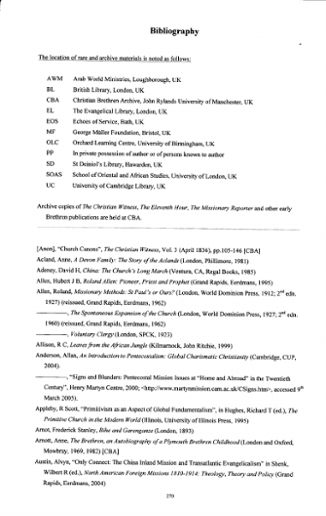 With the publication of his tract Christian Devotedness in 1825, Anthony Morris Groves joined a growing network of Protestants in the United Kingdom who aspired to follow the teaching of Christ and the example of his apostles in a more literal fashion than was common in the churches of their day. Seceding from the Anglican communion in 1828, he adopted a consciously non-denominational identity. With little interest in buildings, services, finances, organisation, training or ceremony, he developed an essentially primitivist ecclesiology, regarding the principles and practice of the early churches in the New Testament as a model to be followed by every generation. A number of Groves's closest friends became leading figures in circles soon to be known as Brethren, or Plymouth Brethren. After leaving Britain in 1829, his ongoing influence in this movement was mediated largely through his brother-in-law George Mtiller, and is reflected in the principles adopted by the latter in his church leadership and in his support of missionaries for more than half a century. One of those influenced by Miiller was the young Hudson Taylor, whose financial support during his early years came almost entirely from Groves's personal friends among the Brethren. It was overseas that Groves himself spent most of his adult life, and in India that we see the clearest practical outworking of his ecclesiology in a cross-cultural context. Identifying weaknesses in existing missionary institutions, he offered an alternative strategy for appointing missionaries, creating churches, maintaining practical unity and stimulating indigenous leadership. His missiological ideas stand in contrast to the consensus of his day, and also to the methods of indigenisation advocated some fourteen years later by Henry Venn and Rufus Anderson. Indeed, he might be described as the first major primitivist among mission strategists, and as such was an early forerunner of Roland Alien. Groves encouraged young Indian Christians to ignore Western church tradition and to follow, as closely as possible, the teaching and practice of Christ and his apostles. He advocated the liberty of indigenous Christians to take responsibility without reference to foreign organisations, the freedom of missionaries and Indian believers to seek guidance and provision directly from God, the sending of evangelists by congregations, the gathering of converts into new congregations, the development of local leadership in the course of active Christian service, and the partnership of industrialist and evangelist in frugal living "by faith" for the extension of the gospel. He viewed education, commerce and medicine as aids to evangelising rather than civilising. Above all, Groves wished to simplify the missionary task of the Church. Where his contemporaries envisaged the creation by one institution (a foreign mission) of another institution (a national church), he drew no distinction between mission and church. And rather than projecting an eventual shift from foreign government, support and propagation to self-government, support and propagation, he would start with no organised government, support or propagation at all, expecting these to develop naturally as local believers helped one another develop their own spiritual abilities and ministries. With no organisation to oversee, no buildings to maintain, no salaries to pay, his emphasis from the start was on the freedom of local converts to meet together without foreign supervision, and to preach the gospel to their own people without being trained, authorised or paid to do so. The influence of Groves on his own and subsequent generations has been seriously underrated. This may be attributable partly to the opposition he encountered during his own lifetime, partly to the commercial failures that clouded his final years, and partly to the inaccessibility of his own writings and works about him. Described twenty years ago as a "neglected missiologist", and largely unknown today, his significance might seem somewhat negligible, but to Groves we can trace back ideas that stimulated the birth of a new generation of missions following what have been called "faith principles". These included Brethren initiatives in many countries in addition to numerous interdenominational "faith missions" inspired by the example of Hudson Taylor. With some justification, Groves has been called the "father of faith missions". Nevertheless, his idea of using the New Testament as a practical manual of missionary methods was taken up with greatest effect not by Anglo-American missionaries but by the leaders of some remarkable indigenous movements. Notable among these was his own disciple John Christian Arulappan and, at a later date, Bakht Singh and Watchman Nee, all of whom had direct or indirect links with him. Our research concludes that the primitivist missiology of Anthony Norris Groves exerted a significant radical influence on Protestant mission in the nineteenth century, and indeed to the present day, for his ideas find many points of contact with current missiological thinking.