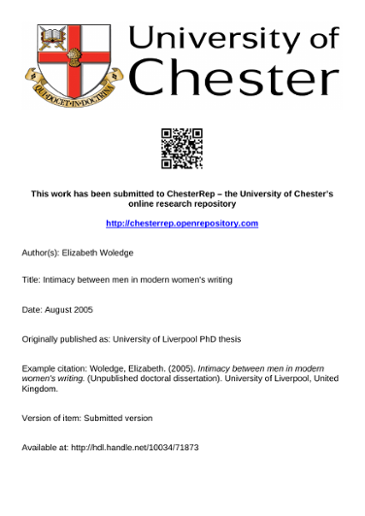 This thesis sets out to investigate, and concludes by defining, a genre of modern women's writing. This genre, which 1 have called 'intimatopia' for its depiction of fictional worlds which centre around intimacy, explores close relationships between men, I use this thesis to elucidate the ideological assumptions which underlie this genre, as well as to consider the textual features which are commonly used to support them. My investigation is facilitated by my choice to focus on the appropriative fictions which form a significant part of the intimatopic genre. The appropriative text is particularly apposite to any project which, like this one, seeks to investigate distinctive ideologies, for in a comparison between the text and its source the ideological perspectives of the writer can be glimpsed. As a result of this approach one of the central features of this thesis is a comparison between hegemonic and intimatopic ideologies, which are found to be markedly different. Central to the intimatopic text, which may be sexually explicit, sexually discreet, or sexually ambiguous, is the assumption that there exists a fluid link between love, friendship and intimacy. This ideological perspective is one which many theoreticians, in fields as diverse as literary criticism, psychology and biology, have connected to feminine, rather than masculine, ways of thinking. Although it is therefore unsurprising to find that this is a feature of a predominantly feminine genre, its application to relationships between men runs counter to ideological assumptions about masculine interaction. From examining a variety of appropriative literature 1 move on to less overtly appropriative texts in which the by now familiar intimatopic features can be identified. Following this, 1 discuss the interpretive communities which produce intimatopic texts, using the example of slash fiction, where the interpretive community is readily accessible, I begin to investigate the ideological assumptions about human interaction which underpin the interpretations typical of intimatopic writing. Finally, I consider the genre's antecedents, and mention other texts which, although they do not take male intimacy as their theme, nonetheless share intimatopic features. Thus this thesis offers an insight into an area of women's writing which has received little critical attention and which I have been able to crystallise into the genre of intimatopia. Whilst it is clearly inaccurate to describe all women's writing as intimatopic, this genre accounts for a significant number of texts by women and should be recognised alongside other feminine genres as part of the varied field of women's literature.