The inclusion of pupils with special educational needs: A study of the formulation and implementation of the National Curriculum physical education 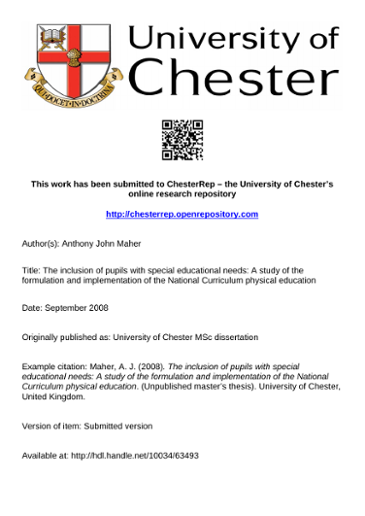 The thesis examines the planned and unplanned outcomes that are associated with the inclusion of pupils with Special Educational Needs (SEN) in the National Curriculum Physical Education (NCPE) 2000. This involved the use of the key concepts and assumptions that underpin the figurational perspective to examine, firstly, the emergence of disability as a social issue in the wider society and, subsequently, secondary school education. In this regard, the thesis highlights how wider social processes such as the campaigns undertaken by the disabled people’s movement (Oliver and Barnes, 2008), and international policy developments such as the Salamanca Statement (UNESCO, 1994) contributed, to varying degrees, to the increasing power chances of disabled people generally in the wider society. Subsequently, one outcome of these processes was that the British Government were constrained to provide all pupils with the opportunity to be educated in mainstream schools. The figurational approach and, in particular, Elias’s game models (Elias, 1978) were then used to analyse the NCPE 1992, 1995 and 2000 documents, and their associated consultation materials. This approach was used because it was argued that Elias’s theoretical framework may allow the researcher to identify all the major players – that is, the whole relational network – involved in the formulation of the NCPE, and the extent to which the objectives of each player, and their subsequent power struggles with each other, impacted upon the NCPEs’ overall objectives and content. In this regard, the thesis suggests that the British Government were able to constrain, to varying degrees, the power and actions of the PE Working Groups by setting the format for the Groups’ recommendations, the groups they should consult, and the time scale within which they were expected to complete their consultation and recommendations. This resulted in the outcomes generated from these formulation processes being largely understood in relation to the government’s elite sports performance objectives, with ‘inclusion issues’ being at the periphery of their objectives for PE. Elias’s game models (Elias, 1978) were also used to examine the extent to which the objectives of the players involved in the implementation of the NCPE 2000 generated outcomes – that were identified by examining existing empirical data – which none of the players involved in the formulation process planned for, or could have foreseen. In this regard, the thesis has suggested that, although the government were by far the most powerful player during the formulation process, their actions – that is, their desire to develop a flexible, inclusive PE curriculum – gave PE teachers the power to determine the extent to which the government’s elite sports performance and inclusion objectives would be achieved. From this process, research suggests that a planned outcome of the NCPE 2000 is that many PE teachers are using their power chances to further their own and, more specifically, the government’s, elite sports performance objectives. However, an unplanned outcome of this process is that some pupils with SEN are spending less time in PE, and are participating in a narrower range of activities than their age-peers in mainstream and special schools.