The Effect of Dietary Carbohydrate and Fat Manipulation on the Metabolome and Markers of Glucose and Insulin Metabolism: A Randomised Parallel Trial 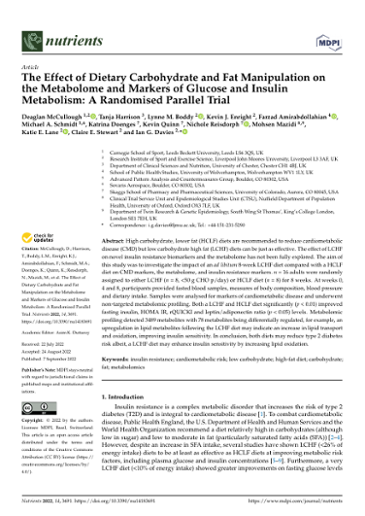 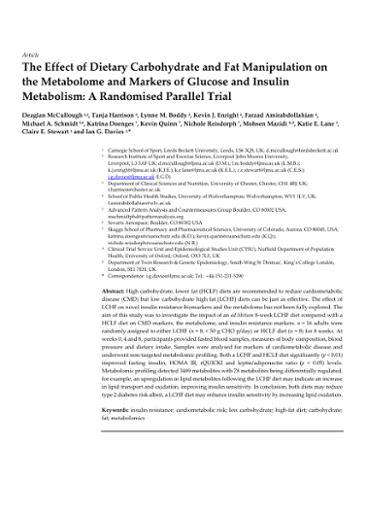 High carbohydrate, lower fat (HCLF) diets are recommended to reduce cardiometabolic disease (CMD) but low carbohydrate high fat (LCHF) diets can be just as effective. The effect of LCHF on novel insulin resistance biomarkers and the metabolome has not been fully explored. The aim of this study was to investigate the impact of an ad libitum 8-week LCHF diet compared with a HCLF diet on CMD markers, the metabolome, and insulin resistance markers. n = 16 adults were randomly assigned to either LCHF (n = 8, < 50 g CHO p/day) or HCLF diet (n = 8) for 8 weeks. At weeks 0, 4 and 8, participants provided fasted blood samples, measures of body composition, blood pressure and dietary intake. Samples were analysed for markers of cardiometabolic disease and underwent non-targeted metabolomic profiling. Both a LCHF and HCLF diet significantly (p < 0.01) improved fasting insulin, HOMA IR, rQUICKI and leptin/adiponectin ratio (p < 0.05) levels. Metabolomic profiling detected 3489 metabolites with 78 metabolites being differentially regulated, for example, an upregulation in lipid metabolites following the LCHF diet may indicate an increase in lipid transport and oxidation, improving insulin sensitivity. In conclusion, both diets may reduce type 2 diabetes risk albeit, a LCHF diet may enhance insulin sensitivity by increasing lipid oxidation.

Except where otherwise noted, this item's license is described as https://creativecommons.org/licenses/by/4.0/