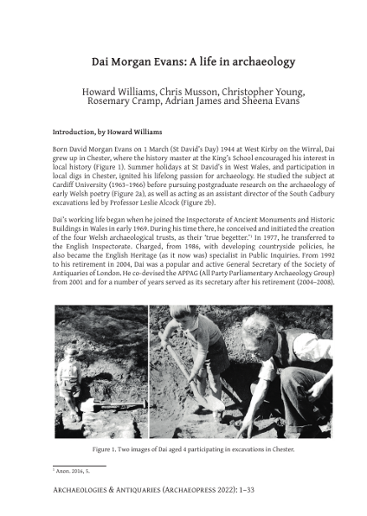 Born David Morgan Evans on 1 March (St David’s Day) 1944 at West Kirby on the Wirral, Dai grew up in Chester, where the history master at the King’s School encouraged his interest in local history (Figure 1). Summer holidays at St David’s in West Wales, and participation in local digs in Chester, ignited his lifelong passion for archaeology. He studied the subject at Cardiff University (1963–1966) before pursuing postgraduate research on the archaeology of early Welsh poetry (Figure 2a), as well as acting as an assistant director of the South Cadbury excavations led by Professor Leslie Alcock (Figure 2b). Dai’s working life began when he joined the Inspectorate of Ancient Monuments and Historic Buildings in Wales in early 1969. During his time there, he conceived and initiated the creation of the four Welsh archaeological trusts, as their ‘true begetter.’1 In 1977, he transferred to the English Inspectorate. Charged, from 1986, with developing countryside policies, he also became the English Heritage (as it now was) specialist in Public Inquiries. From 1992 to his retirement in 2004, Dai was a popular and active General Secretary of the Society of Antiquaries of London. He co-devised the APPAG (All Party Parliamentary Archaeology Group) from 2001 and for a number of years served as its secretary after his retirement (2004–2008). From 2003, Dai was Honorary Lecturer at the Institute of Archaeology at UCL. Having opened University College Chester’s new offices and teaching spaces in the Blue Coat School in 2003 to accommodate the Department of History and Archaeology, Dai served first as an honorary lecturer and then from 2006 as Visiting Professor of Archaeology, teaching and inspiring students and sustaining his research interests. His active retirement also included a host of other activities including television appearances, serving on the National Trust Archaeology Panel, participating in the historic-period dimension of the SPACES project with Geoff Wainwright and Timothy Darvill, and initiating the first modern study of the unique early medieval Welsh monument, the Pillar of Eliseg, at Llantysilio yn Iâl, Denbighshire. After a lifetime contributing to the archaeology of England and Wales, Dai sadly passed away on his birthday aged 73, 1 March 2017. Stemming from the memorial event held at the Society of Antiquaries of London, 11 September 2017: ‘Memorial for Professor Dai Morgan Evans FSA’,3 this multi-authored introduction charts Dai’s life in the service of archaeology. The authors cannot claim to cover all aspects of Dai’s archaeological endeavours, and inevitably the discussion affords depth to some aspects while mentioning others more briefly. However, the perspectives sequentially address different phases of his archaeological career and combine to capture a sense of his overall achievements and legacy. The chapter concludes with a brief introduction to this collection, which constitutes a celebration and memorial to Dai’s archaeological career and research.