Invisible Presences: The Elusive Twin and the Empty Screen in Personal Shopper 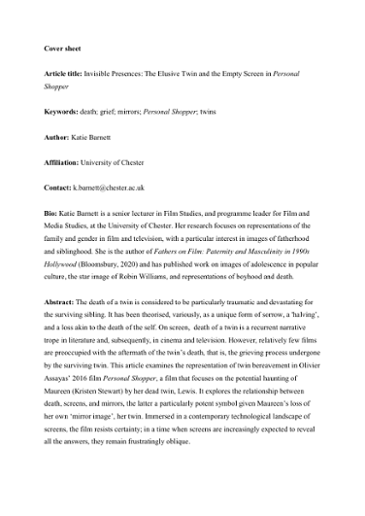 The death of a twin is considered to be particularly traumatic and devastating for the surviving sibling. It has been theorised, variously, as a unique form of sorrow (Brandt, 2001), a “halving” (Withrow and Schwiebert, 2005; Morgan, 2006), and a loss akin to the death of the self (McIlroy, 2011). On screen, twin deaths are not uncommon; indeed, de Nooy (2002) suggests that the death of a twin is a recurrent narrative trope in literature and, subsequently, in cinema and television. However, relatively few films are preoccupied with the aftermath of the twin’s death, that is, the grieving process undergone by the surviving twin. This article will examine the representation of twin bereavement in Olivier Assayas’ 2016 film Personal Shopper, a film that focuses on the potential haunting of Maureen (Kristen Stewart) by her dead twin, Lewis. In the current technological age, death is increasingly ubiquitous on screen. The relationship between death and the screen, however, is complicated in Personal Shopper. In one respect, much of Maureen’s life is lived through screens, whether through the laptop she uses to communicate with her boyfriend or the phone permanently in her grasp. Indeed, it is through mysterious text messages on her phone that Maureen suspects Lewis is trying to communicate with her. Mirrors, too, act as reflective screens in the film, as Maureen illicitly tries on her client Kyra’s designer garments, including a coveted mirrored dress. The symbolism of the mirror is potent, given that Maureen has lost her mirror image – her twin – and remains on a futile search to find him again. Yet these screens are empty, certainly of the thing that Maureen desires – a sign from Lewis – and likewise the cinema screen remains empty of Lewis’ presence, save for tantalising, split-second tricks of the light that must satisfy both Maureen and the viewer (yet do not). In a time when screens are increasingly expected to reveal all the answers, they remain frustratingly oblique. A dual haunting takes place in Personal Shopper. Lewis may (or may not) be haunting his sister, but Maureen is not simply the hauntee. She too haunts, whether tiptoeing around Lewis’s old home in a bid to find his spirit, slipping in and out of Kyra’s apartment to deposit and retrieve clothing, or gliding, undetected, in and out of Kyra’s dresses. There is something curiously spectral about Assayas’ film, in which Maureen herself frequently eludes recognition, an anonymous figure traversing urban landscapes, leaving little trace. In her grief, she too is in danger of disappearing. The twin bond is frequently characterised as “fascinating” (Humann, 2017), “enigmatic” (McIlroy, 2011) and “mythic” (de Nooy, 2005), yet the depth and intensity of this bond is ultimately unknowable to the non-twin. Personal Shopper goes some way to capturing this elusiveness. Despite the mirrors that promise reflection, and the screens that promise knowledge, Maureen’s questions remain unanswered to the end. Though the screen possesses the capacity to represent, project and repeat death, in this case Lewis remains – almost – out of sight.

Barnett, K. (2022). Invisible presences: The Elusive Twin and the Empty Screen in Personal Shopper. Revenant: Critical and creative studies of the supernatural, 8, 47-63.

Revenant: Critical and creative studies of the supernatural

Except where otherwise noted, this item's license is described as https://creativecommons.org/licenses/by-nc-nd/4.0/