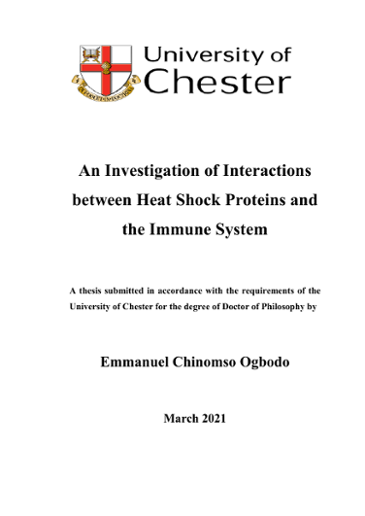 The human body initiates an inflammatory immune response following exposure to certain danger signals. The Danger Model proposes that Antigen-presenting cells (APCs) can be activated by danger or alarm signals. These danger signals come from exogenous molecules such as pathogens, toxins, or even mechanical cell damage. Damage due to cellular stress can initiate the extracellular release of endogenous molecules, such as heat shock proteins (HSPs) into the extracellular environment. HSPs can act as danger signals triggering the immune response. This immune response is based on antigen recognition by specific cell surface receptor proteins, and T-cells, which then determine the type of inflammatory (pro or anti-inflammatory) cytokines produced or expressed. This thesis investigates the effects of Hsp72 and Hsp27 in the activation of immune cells to secrete cytokines, which are upregulated during inflammatory responses. In determining the role of HSPs in affecting inflammatory immune responses, U937 cells, U937 macrophages, and peripheral blood mononuclear cells (PBMCs) were used. To determine whether the effects observed with recombinant HSPs used in these studies, were due to bacterial contamination: U937 macrophages were exposed either to denatured HSPs, polymyxin B (which can neutralise bacterial lipopolysaccharides), anti-HSPs antibodies, or receptor proteins blocking peptides, and their ability to induce cytokine (ie IL-1β, TNF-α, and IL-10) secretion were analysed using enzyme-linked immunosorbent assays (ELISA). Western blotting was used to confirm the presence of Hsp72, Hsp27, and Hsp60 in U937 cells and U937 macrophage. Flow cytometry was used to identify the expression of immune responsive receptor proteins such as CD14, CD36, CD11b, TLR2, TLR4, TLR5, and TLR7, on U937 cells and U937 macrophages. The result presented in this thesis also showed that Hsp72 and Hsp27 can stimulate immune responses independent of bacterial contamination. These HSPs are able to induce an inflammatory immune response, possibly through interactions with a number of immune responsive receptor proteins, which were identified in U937 cells and U937 macrophages. Further evidence using CD14, CD36, CD11b, TLR2, TLR4, TLR5, and TLR7 blocking peptides, also confirmed that an interaction between cytokine secretion caused by, Hsp72 and Hsp27 were likely due to their interactions with specific immune responsive receptor proteins. Interestingly, some of the receptor proteins identified are not activated by lipopolysaccharide (LPS), again highlighting the fact that the results presented in this thesis, are unlikely to be artifacts caused by bacterial contamination. Furthermore, it is clear that HSPs are interacting with numerous receptor proteins, and possibly more than even demonstrated in this thesis. This therefore highlights the promiscuous nature of HSPs interaction with different signalling pathways through the different receptor proteins. The promiscuous property of HSPs could thus be used for the treatment of diseases, since HSPs have been linked with many diseases, including cancer. Therefore, understanding the full relationship between HSPs and these signalling pathways, may prove promising in using HSPs for therapeutic purposes in future.

Ogbodo, E. (2021). An Investigation of Interactions between heat shock proteins and the immune system [Unpublished doctoral thesis]. University of Chester.