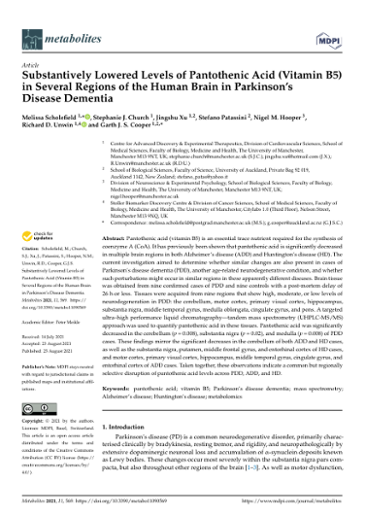 Pantothenic acid (vitamin B5) is an essential trace nutrient required for the synthesis of coenzyme A (CoA). It has previously been shown that pantothenic acid is significantly decreased in multiple brain regions in both Alzheimer’s disease (ADD) and Huntington’s disease (HD). The current investigation aimed to determine whether similar changes are also present in cases of Parkinson’s disease dementia (PDD), another age-related neurodegenerative condition, and whether such perturbations might occur in similar regions in these apparently different diseases. Brain tissue was obtained from nine confirmed cases of PDD and nine controls with a post-mortem delay of 26 h or less. Tissues were acquired from nine regions that show high, moderate, or low levels of neurodegeneration in PDD: the cerebellum, motor cortex, primary visual cortex, hippocampus, substantia nigra, middle temporal gyrus, medulla oblongata, cingulate gyrus, and pons. A targeted ultra–high performance liquid chromatography—tandem mass spectrometry (UHPLC-MS/MS) approach was used to quantify pantothenic acid in these tissues. Pantothenic acid was significantly decreased in the cerebellum (p = 0.008), substantia nigra (p = 0.02), and medulla (p = 0.008) of PDD cases. These findings mirror the significant decreases in the cerebellum of both ADD and HD cases, as well as the substantia nigra, putamen, middle frontal gyrus, and entorhinal cortex of HD cases, and motor cortex, primary visual cortex, hippocampus, middle temporal gyrus, cingulate gyrus, and entorhinal cortex of ADD cases. Taken together, these observations indicate a common but regionally selective disruption of pantothenic acid levels across PDD, ADD, and HD.