Perspectives on Adolescents’ Obesity Amidst the Nutrition Transition in Lebanon 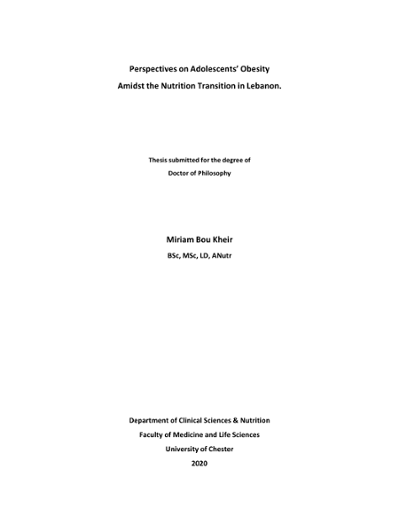 Adolescent obesity is a major public health concern, increasingly affecting low and middle-income countries (LMICs) undergoing the nutrition transition. In developed countries, governments had the time to adjust to this rise in the consequent non-communicable diseases (NCDs), whereas the developing world is facing a triple burden of nutrition-related disease simultaneously. However, amidst the nutrition transition, drivers to obesity may differ within the same country especially between the urban and rural areas, depending on the context and environmental factors. In order to unravel how the nutrition transition process unfolds in both urban and rural areas, an exploration of the factors affecting adolescents’ lifestyle and eating behaviours, in the current context was deemed appropriate. Additionally, exploring stakeholders’ views on adolescents’ obesity including facilitators and barriers to obesity prevention is key in intervention and policy drawing. This study thus aimed to explore in-depth, whether, how, and to what extent is the nutrition transition currently affecting adolescents’ environments in Lebanon, focusing on both adolescents’ and stakeholders’ perspectives, awareness, and barriers to the prevention of adolescents’ obesity. The study used a sequential multi-method approach along a bricolage methodology. The first phase of the study adopted a qualitative approach, involving focus groups with adolescents (n = 78) to explore their perceptions regarding their eating behaviours as well as the role of the environment surrounding them in both urban and rural areas. A number of direct (availability of Western foods, peer pressure, parental control, eating location, body image) and indirect (adolescence autonomy, role modeling, cultural beliefs, peer surveillance) factors seemed to influence adolescents’ eating behaviours. Almost similar behaviours were perceived between the urban and rural area, showcasing the impact of the nutrition transition in both areas although different underlying factors were stated. The factors identified in this study were grouped and discussed based on the socioecological model (SEM) highlighting the importance of the social and environmental influences on adolescents’ eating behaviours. The second phase of the study adopted a qualitative approach; using one-to-one interviews to investigate stakeholders’ opinions on adolescents’ obesity. The study highlighted the barriers and facilitators in preventing adolescents’ obesity in relation to adolescents’ eating behaviours and the surrounding environment. Key stakeholders interviewed in this phase included different sectors such as the Ministry of Education, Municipalities, Transportation NGOs, with a special emphasis on the school setting including school directors, manager of school cafeteria, sports teacher, school nurse and head teacher. Interviews revealed the lack of awareness concerning the obesity problem and the importance of the environmental influences, a lack of intersectoral cooperation between stakeholders in Lebanon and a greater emphasis on the individual responsibility in the prevention of adolescents’ obesity. This study has revealed and engaged with the varied conceptualisations of obesity causation amongst adolescents, in both urban and rural areas, amid the nutrition transition in Lebanon. Acknowledging that the causes of obesity are complex this study collects insights of both adolescents and key stakeholders’ perceptions; to date, no study has engaged with both in Lebanon, justifying the need for the present study. Clearly, in keeping with the literature on the different rate of nutrition transition between rural and urban environments further justifies the consideration of both context. Given the findings of this study in regards to the dramatic changes affecting both urban and rural areas regarding the number of meals consumed away from home, the increase in fast-food consumption and the increase in sedentary lifestyles, new challenges in relation to adolescent obesity prevention in LMICs are created. The creation of supportive local environments, in both urban and rural areas, represents an important avenue where eating behaviours concerns, and thus adolescents’ obesity can be addressed.