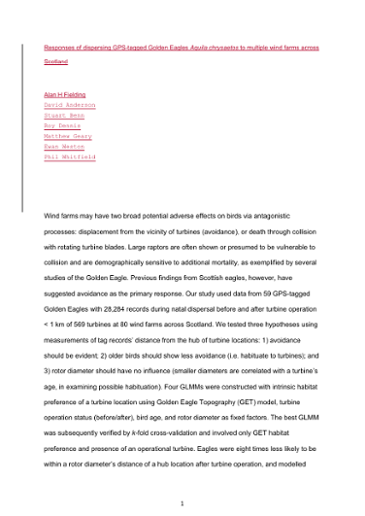 Wind farms may have two broad potential adverse effects on birds via antagonistic processes: displacement from the vicinity of turbines (avoidance), or death through collision with rotating turbine blades. Large raptors are often shown or presumed to be vulnerable to collision and are demographically sensitive to additional mortality, as exemplified by several studies of the Golden Eagle Aquila chrysaetos. Previous findings from Scottish Eagles, however, have suggested avoidance as the primary response. Our study used data from 59 GPS-tagged Golden Eagles with 28 284 records during natal dispersal before and after turbine operation < 1 km of 569 turbines at 80 wind farms across Scotland. We tested three hypotheses using measurements of tag records’ distance from the hub of turbine locations: (1) avoidance should be evident; (2) older birds should show less avoidance (i.e. habituate to turbines); and (3) rotor diameter should have no influence (smaller diameters are correlated with a turbine’s age, in examining possible habituation). Four generalized linear mixed models (GLMMs) were constructed with intrinsic habitat preference of a turbine location using Golden Eagle Topography (GET) model, turbine operation status (before/after), bird age and rotor diameter as fixed factors. The best GLMM was subsequently verified by k-fold cross-validation and involved only GET habitat preference and presence of an operational turbine. Eagles were eight times less likely to be within a rotor diameter’s distance of a hub location after turbine operation, and modelled displacement distance was 70 m. Our first hypothesis expecting avoidance was supported. Eagles were closer to turbine locations in preferred habitat but at greater distances after turbine operation. Results on bird age (no influence to 5+ years) rejected hypothesis 2, implying no habituation. Support for hypothesis 3 (no influence of rotor diameter) also tentatively inferred no habituation, but data indicated birds went slightly closer to longer rotor blades although not to the turbine tower. We proffer that understanding why avoidance or collision in large raptors may occur can be conceptually envisaged via variation in fear of humans as the ‘super predator’ with turbines as cues to this life-threatening agent.

Except where otherwise noted, this item's license is described as Attribution-NonCommercial 4.0 International