Leading brand products and their supermarket economy line equivalents, is there a difference in nutritional content? 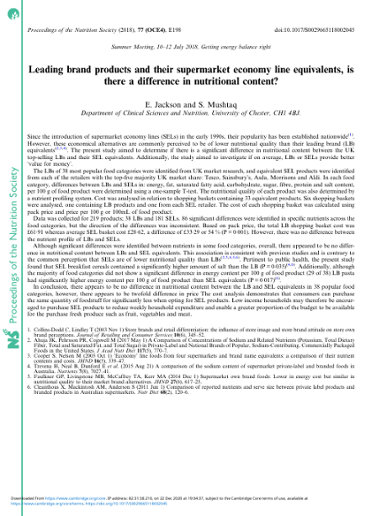 Since the introduction of supermarket economy lines (SELs) in the early 1990s, their popularity has been established nationwide(1).However, these economical alternatives are commonly perceived to be of lower nutritional quality than their leading brand (LB)equivalents(2,3,4). The present study aimed to determine if there is a significant difference in nutritional content between the UKtop-selling LBs and their SEL equivalents. Additionally, the study aimed to investigate if on average, LBs or SELs provide better‘value for money’.The LBs of 38 most popular food categories were identified from UK market research, and equivalent SEL products were identifiedfrom each of the retailers with the top-five majority UK market share: Tesco, Sainsbury’s, Asda, Morrisons and Aldi. In each foodcategory, differences between LBs and SELs in: energy, fat, saturated fatty acid, carbohydrate, sugar,fibre, protein and salt content,per 100 g of food product were determined using a one-sample T-test. The nutritional quality of each product was also determined bya nutrient profiling system. Cost was analysed in relation to shopping baskets containing 33 equivalent products. Six shopping basketswere analysed, one containing LB products and one from each SEL retailer. The cost of each shopping basket was calculated usingpack price and price per 100 g or 100mL of food product.Data was collected for 219 products; 38 LBs and 181 SELs. 86 significant differences were identified in specific nutrients across thefood categories, but the direction of the differences was inconsistent. Based on pack price, the total LB shopping basket cost was£61·91 whereas average SEL basket cost £28·62, a difference of £33·29 or 54 % (P = 0·001). However, there was no difference betweenthe nutrient profile of LBs and SELs.Although significant differences were identified between nutrients in some food categories, overall, there appeared to be no differ-ence in nutritional content between LBs and SEL equivalents. This association is consistent with previous studies and is contrary tothe common perception that SELs are of lower nutritional quality than LBs(2,3,4,5,6). Pertinent to public health, the present studyfound that SEL breakfast cereals contained a significantly higher amount of salt than the LB (P = 0·035)(4,6). Additionally, althoughthe majority of food categories did not show a significant difference in energy content per 100 g of food product (29 of 38) LB pastahad significantly higher energy content per 100 g of food product than SEL equivalents (P = 0·017)(6).In conclusion, there appears to be no difference in nutritional content between the LB and SEL equivalents in 38 popular foodcategories, however, there appears to be twofold difference in price The cost analysis demonstrates that consumers can purchasethe same quantity of foodstuff for significantly less when opting for SEL products. Low income households may therefore be encour-aged to purchase SEL products to reduce weekly household expenditure and enable a greater proportion of the budget to be availablefor the purchase fresh produce such as fruit, vegetables and meat

Jackson, E., & Mushtaq, S. (2018). Leading brand products and their supermarket economy line equivalents, is there a difference in nutritional content?. Proceedings of the Nutrition Society, 77(OCE4).

Proceedings of the Nutrition society

Except where otherwise noted, this item's license is described as Attribution 4.0 International