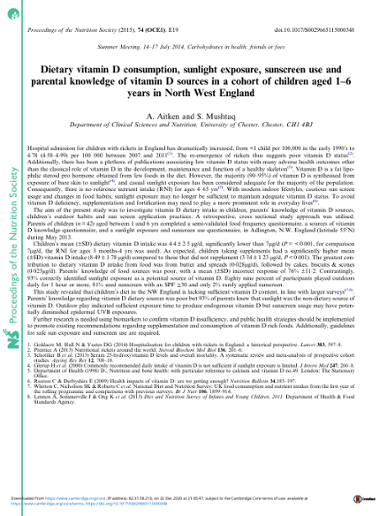 Hospital admission for children with rickets in England has dramatically increased, from <1 child per 100,000 in the early 1990's to 4·78 (4·58–4·99) per 100 000 between 2007 and 2011( 1 ). The re-emergence of rickets thus suggests poor vitamin D status( 2 ). Additionally, there has been a plethora of publications associating low vitamin D status with many adverse health outcomes other than the classical role of vitamin D in the development, maintenance and function of a healthy skeleton( 3 ). Vitamin D is a fat lipophilic steroid pro hormone obtained from few foods in the diet. However, the majority (90–95%) of vitamin D is synthesised from exposure of bare skin to sunlight( 4 ), and casual sunlight exposure has been considered adequate for the majority of the population. Consequently, there is no reference nutrient intake (RNI) for ages 4–65 yrs( 5 ). With modern indoor lifestyles, cautious sun screen usage and changes in food habits, sunlight exposure may no longer be sufficient to maintain adequate vitamin D status. To avoid vitamin D deficiency, supplementation and fortification may need to play a more prominent role in everyday lives( 6 ). The aim of the present study was to investigate vitamin D dietary intake in children, parents’ knowledge of vitamin D sources, children's outdoor habits and sun screen application practices. A retrospective, cross sectional study approach was utilised. Parents of children (n = 42) aged between 1 and 6 yrs completed a semi-validated food frequency questionnaire, a sources of vitamin D knowledge questionnaire, and a sunlight exposure and sunscreen use questionnaire, in Adlington, N.W. England (latitude 55oN) during May 2013. Children's mean (±SD) dietary vitamin D intake was 4·4 ± 2·5 μg/d, significantly lower than 7μg/d (P = < 0·001, for comparison 7μg/d, the RNI for ages 3 months-4 yrs was used). As expected, children taking supplements had a significantly higher mean (±SD) vitamin D intake (8·49 ± 1·78 μg/d) compared to those that did not supplement (3·34 ± 1·23 μg/d, P < 0·001). The greatest contribution to dietary vitamin D intake from food was from butter and spreads (0·028μg/d), followed by cakes, biscuits & scones (0·023μg/d). Parents' knowledge of food sources was poor, with a mean (±SD) incorrect response of 76% ±11·2. Contrastingly, 93% correctly identified sunlight exposure as a potential source of vitamin D. Eighty nine percent of participants played outdoors daily for 1 hour or more, 81% used sunscreen with an SPF ≥30 and only 2% rarely applied sunscreen. This study revealed that children's diet in the NW England is lacking sufficient vitamin D content, in line with larger surveys( 7 , 8 ). Parents' knowledge regarding vitamin D dietary sources was poor but 93% of parents knew that sunlight was the non-dietary source of vitamin D. Outdoor play indicated sufficient exposure time to produce endogenous vitamin D but sunscreen usage may have potentially diminished epidermal UVB exposures. Further research is needed using biomarkers to confirm vitamin D insufficiency, and public health strategies should be implemented to promote existing recommendations regarding supplementation and consumption of vitamin D rich foods. Additionally, guidelines for safe sun exposure and sunscreen use are required.

Proceedings of the Nutrition Society

Except where otherwise noted, this item's license is described as Attribution-NoDerivatives 4.0 International