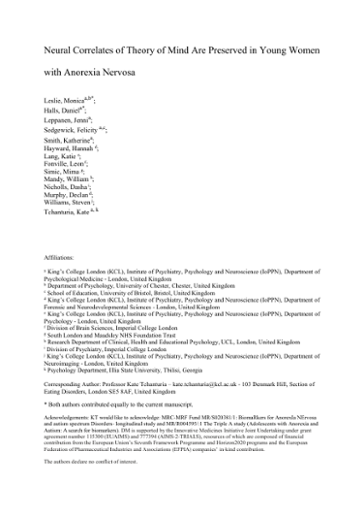 People with anorexia nervosa (AN) commonly exhibit social difficulties, which may be related to problems with understanding the perspectives of others, commonly known as Theory of Mind (ToM) processing. However, there is a dearth of literature investigating the neural basis of these differences in ToM and at what age they emerge. This study aimed to test for differences in the neural correlates of ToM processes in young women with AN, and young women weight-restored from AN, as compared to healthy control participants (HC). Based on previous findings in AN, we hypothesised that young women with current or prior AN, as compared to HCs, would exhibit a reduced neural response in the medial prefrontal cortex, the inferior frontal gyrus, and the temporo-parietal junction whilst completing a ToM task. We recruited 73 young women with AN, 45 weight-restored young women, and 70 young women without a history of AN to take part in the current study. Whilst undergoing a functional magnetic resonance imaging (fMRI) scan, participants completed the Frith-Happé task, which is a commonly-used measure of ToM with demonstrated reliability and validity in adult populations. In this task, participants viewed the movements of triangles, which depicted either action movements, simple interactions, or complex social interactions. Viewing trials with more complex social interactions in the Frith-Happé task was associated with increased brain activation in regions including the right temporo-parietal junction, the bilateral medial prefrontal cortex, the cerebellum, and the dorsolateral prefrontal cortex. There were no group differences in neural activation in response to the ToM contrast. Overall, these results suggest that the neural basis of spontaneous mentalising is preserved in most young women with AN.