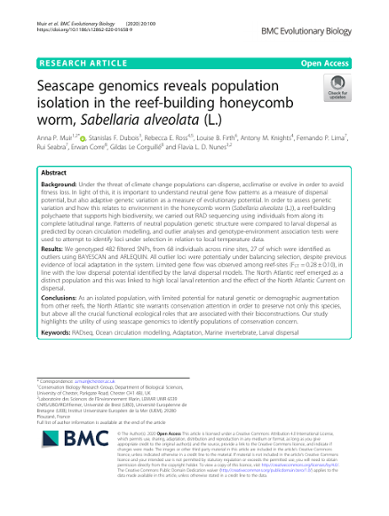 Background: Under the threat of climate change populations can disperse, acclimatise or evolve in order to avoid fitness loss. In light of this, it is important to understand neutral gene flow patterns as a measure of dispersal potential, but also adaptive genetic variation as a measure of evolutionary potential. In order to assess genetic variation and how this relates to environment in the honeycomb worm (Sabellaria alveolata (L.)), a reef-building polychaete that supports high biodiversity, we carried out RAD sequencing using individuals from along its complete latitudinal range. Patterns of neutral population genetic structure were compared to larval dispersal as predicted by ocean circulation modelling, and outlier analyses and genotype-environment association tests were used to attempt to identify loci under selection in relation to local temperature data. Results: We genotyped 482 filtered SNPs, from 68 individuals across nine sites, 27 of which were identified as outliers using BAYESCAN and ARLEQUIN. All outlier loci were potentially under balancing selection, despite previous evidence of local adaptation in the system. Limited gene flow was observed among reef-sites (FST = 0.28 ± 0.10), in line with the low dispersal potential identified by the larval dispersal models. The North Atlantic reef emerged as a distinct population and this was linked to high local larval retention and the effect of the North Atlantic Current on dispersal. Conclusions: As an isolated population, with limited potential for natural genetic or demographic augmentation from other reefs, the North Atlantic site warrants conservation attention in order to preserve not only this species, but above all the crucial functional ecological roles that are associated with their bioconstructions. Our study highlights the utility of using seascape genomics to identify populations of conservation concern.