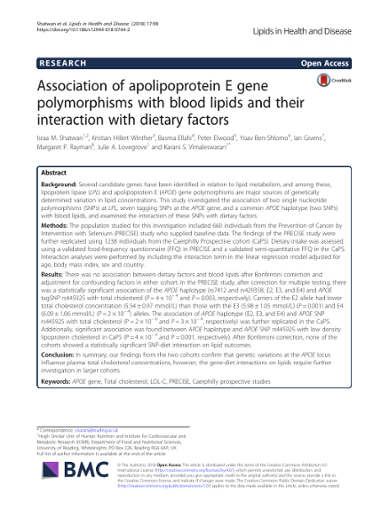 Abstract Background: Several candidate genes have been identified in relation to lipid metabolism, and among these, lipoprotein lipase (LPL) and apolipoprotein E (APOE) gene polymorphisms are major sources of genetically determined variation in lipid concentrations. This study investigated the association of two single nucleotide polymorphisms (SNPs) at LPL, seven tagging SNPs at the APOE gene, and a common APOE haplotype (two SNPs) with blood lipids, and examined the interaction of these SNPs with dietary factors. Methods: The population studied for this investigation included 660 individuals from the Prevention of Cancer by Intervention with Selenium (PRECISE) study who supplied baseline data. The findings of the PRECISE study were further replicated using 1,238 individuals from the Caerphilly Prospective cohort (CaPS). Dietary intake was assessed using a validated food-frequency questionnaire (FFQ) in PRECISE and a validated semi-quantitative FFQ in the CaPS. Interaction analyses were performed by including the interaction term in the linear regression model adjusted for age, body mass index, sex and country. Results: There was no association between dietary factors and blood lipids after Bonferroni correction and adjustment for confounding factors in either cohort. In the PRECISE study, after correction for multiple testing, there was a statistically significant association of the APOE haplotype (rs7412 and rs429358; E2, E3, and E4) and APOE tagSNP rs445925 with total cholesterol (P=4x10-4 and P=0.003, respectively). Carriers of the E2 allele had lower total cholesterol concentration (5.54± 0.97 mmol/L) than those with the E3 (5.98± 1.05 mmol/L) (P=0.001) and E4 (6.09± 1.06 mmol/L) (P=2x10-4) alleles. The association of APOE haplotype (E2, E3, and E4) and APOE SNP rs445925 with total cholesterol (P=2x10-6 and P=3x10-4, respectively) was further replicated in the CaPS. Additionally, significant association was found between APOE haplotype and APOE SNP rs445925 with low density lipoprotein cholesterol in CaPS (P=4x10-4 and P=0.001, respectively). After Bonferroni correction, none of the cohorts showed a statistically significant SNP-diet interaction with lipid outcomes. Conclusion: In summary, our findings from the two cohorts confirm that genetic variations at the APOE locus influence plasma total cholesterol concentrations, however, the gene-diet interactions on lipids require further investigation in larger cohorts.

Lipids in Health and Disease

Except where otherwise noted, this item's license is described as Attribution 4.0 International