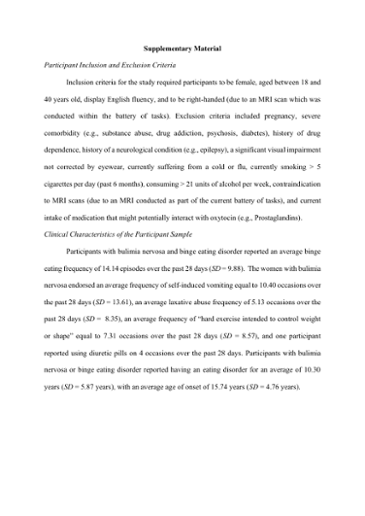 Background: Previous research has found that exogenous oxytocin administration has the potential to modulate attentional biases in women with anorexia nervosa. Recent work has indicated that attentional biases to food may reinforce the recurrent binge eating behaviour which characterises bulimia nervosa and binge eating disorder. To date, however, no study has yet investigated the effect of oxytocin on attentional biases to palatable food in women with bulimia nervosa and binge eating disorder. Methods: This study employed a single-session crossover design to test the hypothesis that a divided dose of 64IU intranasal oxytocin, administered as one intranasal dose of 40IU oxytocin followed by a top-up of 24IU oxytocin 80 minutes later, versus placebo administration administered in the same dosing schedule, would reduce attentional biases towards food images in a dot probe task. We hypothesised that oxytocin administration would reduce vigilance towards food to a greater degree in women with bulimia nervosa or binge eating disorder, versus healthy comparison women. Twenty-five women with bulimia nervosa or binge eating disorder and 27 comparison women without history of an eating disorder were recruited to take part in the study. Results: Contrary to our hypothesis, there was no main effect of diagnosis on attentional bias to food (fixed effect = 5.70, p = .363), nor a significant interaction between diagnosis and drug condition (fixed effect = -14.80, p = .645). There was a main effect of drug condition, such that oxytocin increased vigilance towards food, versus neutral, images in the dot probe task (fixed effect = 10.42, p = .044). A correlation analysis revealed that this effect was moderated by attentional bias in the placebo condition, such that greater avoidance of food stimuli in the placebo condition was associated with a greater increase in vigilance induced by oxytocin. Conclusion: The current findings add to a mixed body of literature investigating the therapeutic effects of oxytocin in women. Future research would benefit from dose-response studies investigating the optimal dose of oxytocin for modulating the attentional processing of palatable food in populations with eating disorders.

This is the peer reviewed version of the following article: Leslie, M., Leppanen, J., Paloyelis, Y., Treasure, J. (2020). A pilot study investigating the influence of oxytocin on attentional bias to food images in women with bulimia nervosa or binge eating disorder. Journal of Neuroendocrinology, 32(5), e12843, which has been published in final form at https://onlinelibrary.wiley.com/doi/full/10.1111/jne.12843. This article may be used for non-commercial purposes in accordance with Wiley Terms and Conditions for Use of Self-Archived Versions.