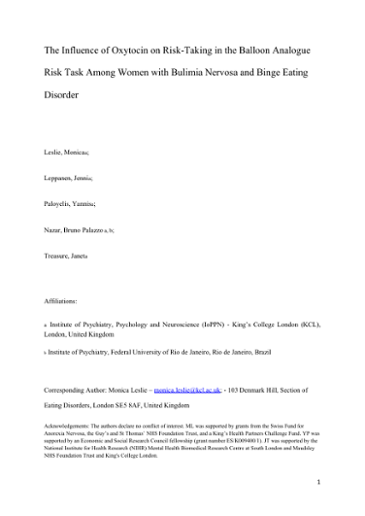 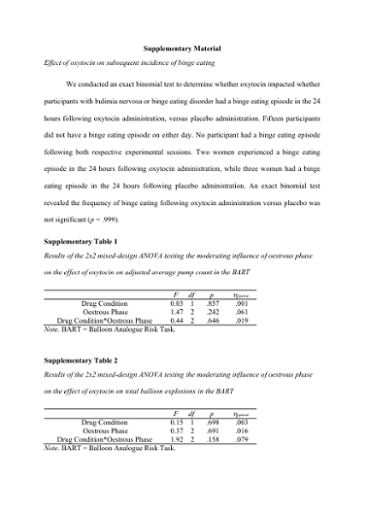 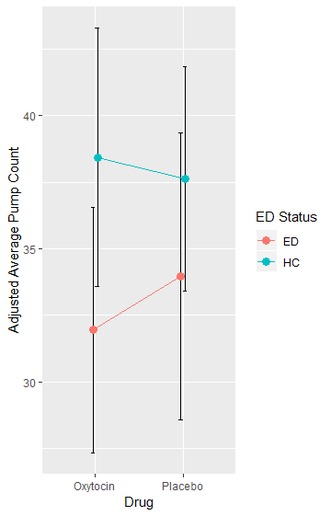 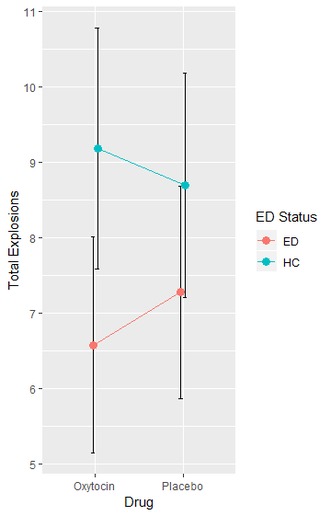 Previous theoretical models of bulimia nervosa (BN) and binge eating disorder (BED) have implicated cross-domain risk-taking behaviour as a significant maintenance factor in both disorders. The current study sought to test this hypothesis by administering the Balloon Analogue Risk Task (BART) to 25 women with BN or BED and 27 healthy comparison women without history of an eating disorder. Furthermore, we tested the effect of a divided dose of 64IU oxytocin on risk-taking behaviour in the BART. Contrary to our hypothesis, women with BN or BED did not exhibit baseline differences in performance on the BART in the placebo condition (t = 1.42, df = 50, p = .161, d = 0.39). Oxytocin did not have a main effect on performance in the BART (F = 0.01, df = 1, p = .907, η2partial < .001); however, there was an interaction such that participants in the BN/BED participant group, compared to the healthy comparison group, demonstrated safer behaviour on the BART specifically in the oxytocin condition, but not in the placebo condition (F = 4.29, df = 1, p = .044, η2partial = .082). These findings cast doubt on the common assumption that individuals with BN and BED exhibit greater risk-taking behaviour in all domains and add to evidence that oxytocin plays a functional role in modulating behaviours which entail trade-offs between reward approach and risk in humans. We recommend that future dose-response studies further investigate the effect of oxytocin on reward approach behaviour in women with recurrent binge eating behaviour and the clinical significance of this effect.

This is the peer reviewed version of the following article: Leslie, M., Leppanen, J., Paloyelis, Y., & Treasure, J. (2019). The influence of oxytocin on risk-taking in the balloon analogue risk task among women with bulimia nervosa and binge eating disorder. Journal of Neuroendocrinology, 31(8), e12771. doi:10.1111/jne.12771, which has been published in final form at https://onlinelibrary.wiley.com/doi/abs/10.1111/jne.12771. This article may be used for non-commercial purposes in accordance with Wiley Terms and Conditions for Use of Self-Archived Versions.