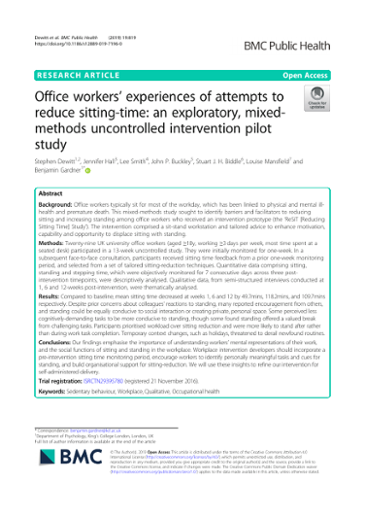 Background: Office workers typically sit for most of the workday, which has been linked to physical and mental ill- health and premature death. This mixed-methods study sought to identify barriers and facilitators to reducing sitting and increasing standing among office workers who received an intervention prototype (the ‘ReSiT [Reducing Sitting Time] Study’). The intervention comprised a sit-stand workstation and tailored advice to enhance motivation, capability and opportunity to displace sitting with standing. Methods: Twenty-nine UK university office workers (aged ≥18y, working ≥3 days per week, most time spent at a seated desk) participated in a 13-week uncontrolled study. They were initially monitored for one-week. In a subsequent face-to-face consultation, participants received sitting time feedback from a prior one-week monitoring period, and selected from a set of tailored sitting-reduction techniques. Quantitative data comprising sitting, standing and stepping time, which were objectively monitored for 7 consecutive days across three post- intervention timepoints, were descriptively analysed. Qualitative data, from semi-structured interviews conducted at 1, 6 and 12-weeks post-intervention, were thematically analysed. Results: Compared to baseline, mean sitting time decreased at weeks 1, 6 and 12 by 49.7mins, 118.2mins, and 109.7mins respectively. Despite prior concerns about colleagues’ reactions to standing, many reported encouragement from others, and standing could be equally conducive to social interaction or creating private, personal space. Some perceived less cognitively-demanding tasks to be more conducive to standing, though some found standing offered a valued break from challenging tasks. Participants prioritised workload over sitting reduction and were more likely to stand after rather than during work task completion. Temporary context changes, such as holidays, threatened to derail newfound routines. Conclusions: Our findings emphasise the importance of understanding workers’ mental representations of their work, and the social functions of sitting and standing in the workplace. Workplace intervention developers should incorporate a pre-intervention sitting time monitoring period, encourage workers to identify personally meaningful tasks and cues for standing, and build organisational support for sitting-reduction. We will use these insights to refine our intervention for self-administered delivery. Trial registration: ISRCTN29395780 (registered 21 November 2016). Keywords: Sedentary behaviour, Workplace, Qualitative, Occupational health

Except where otherwise noted, this item's license is described as CC0 1.0 Universal