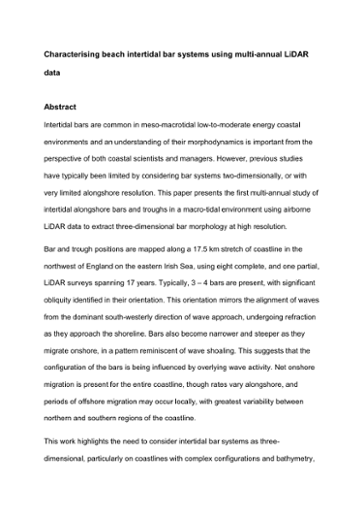 Intertidal bars are common in meso-macrotidal low-to-moderate energy coastal environments and an understanding of their morphodynamics is important from the perspective of both coastal scientists and managers. However, previous studies have typically been limited by considering bar systems two-dimensionally, or with very limited alongshore resolution. This paper presents the first multi-annual study of intertidal alongshore bars and troughs in a macro-tidal environment using airborne LiDAR data to extract three-dimensional bar morphology at high resolution. Bar and trough positions are mapped along a 17.5 km stretch of coastline in the northwest of England on the eastern Irish Sea, using eight complete, and one partial, LiDAR surveys spanning 17 years. Typically, 3 – 4 bars are present, with significant obliquity identified in their orientation. This orientation mirrors the alignment of waves from the dominant south-westerly direction of wave approach, undergoing refraction as they approach the shoreline. Bars also become narrower and steeper as they migrate onshore, in a pattern reminiscent of wave shoaling. This suggests that the configuration of the bars is being influenced by overlying wave activity. Net onshore migration is present for the entire coastline, though rates vary alongshore, and periods of offshore migration may occur locally, with greatest variability between northern and southern regions of the coastline. This work highlights the need to consider intertidal bar systems as three-dimensional, particularly on coastlines with complex configurations and bathymetry, as localised studies of bar migration can overlook three-dimensional behaviour. Furthermore, the wider potential of LiDAR data in enabling high-resolution morphodynamic studies is clear, both within the coastal domain and beyond.

This is the peer reviewed version of the following article: Miles, A., Ilic, S., Whyatt, D., & James, M. R. (2019). Characterising beach intertidal bar systems using multi‐annual LiDAR data. Earth Surface Processes and Landforms, which has been published in final form at https://doi.org/10.1002/esp.4594. This article may be used for non-commercial purposes in accordance with Wiley Terms and Conditions for Self-Archiving