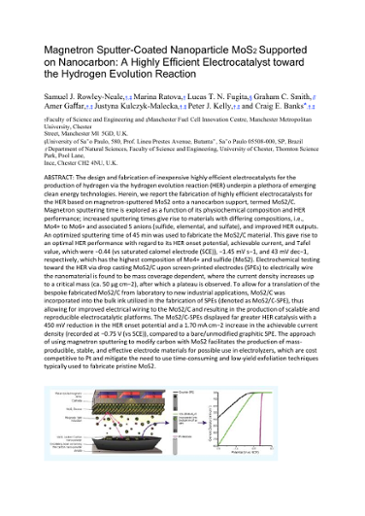 The design and fabrication of inexpensive highly efficient electrocatalysts for the production of hydrogen via the hydrogen evolution reaction (HER) underpin a plethora of emerging clean energy technologies. Herein, we report the fabrication of highly efficient electrocatalysts for the HER based on magnetron-sputtered MoS2 onto a nanocarbon support, termed MoS2/C. Magnetron sputtering time is explored as a function of its physiochemical composition and HER performance; increased sputtering times give rise to materials with differing compositions, i.e., Mo4+ to Mo6+ and associated S anions (sulfide, elemental, and sulfate), and improved HER outputs. An optimized sputtering time of 45 min was used to fabricate the MoS2/C material. This gave rise to an optimal HER performance with regard to its HER onset potential, achievable current, and Tafel value, which were −0.44 (vs saturated calomel electrode (SCE)), −1.45 mV s−1, and 43 mV dec−1, respectively, which has the highest composition of Mo4+ and sulfide (MoS2). Electrochemical testing toward the HER via drop casting MoS2/C upon screen-printed electrodes (SPEs) to electrically wire the nanomaterial is found to be mass coverage dependent, where the current density increases up to a critical mass (ca. 50 μg cm−2), after which a plateau is observed. To allow for a translation of the bespoke fabricated MoS2/C from laboratory to new industrial applications, MoS2/C was incorporated into the bulk ink utilized in the fabrication of SPEs (denoted as MoS2/C-SPE), thus allowing for improved electrical wiring to the MoS2/C and resulting in the production of scalable and reproducible electrocatalytic platforms. The MoS2/C-SPEs displayed far greater HER catalysis with a 450 mV reduction in the HER onset potential and a 1.70 mA cm−2 increase in the achievable current density (recorded at −0.75 V (vs SCE)), compared to a bare/unmodified graphitic SPE. The approach of using magnetron sputtering to modify carbon with MoS2 facilitates the production of mass-producible, stable, and effective electrode materials for possible use in electrolyzers, which are cost competitive to Pt and mitigate the need to use time-consuming and low-yield exfoliation techniques typically used to fabricate pristine MoS2.

This document is the Accepted Manuscript version of a Published Work that appeared in final form in ACS Omega, copyright © American Chemical Society after peer review and technical editing by the publisher. To access the final edited and published work see https://pubs.acs.org/doi/10.1021/acsomega.8b00258