The Philosophy of Homelessness 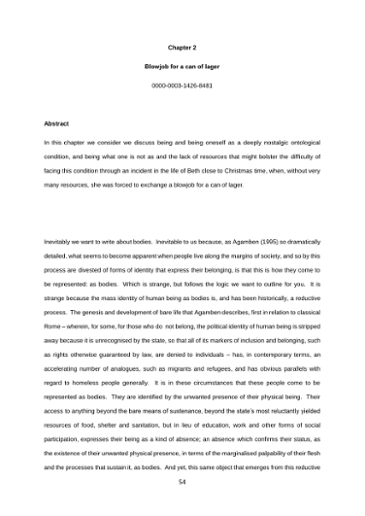 A Philosophy of Homelessness is, in a number of respects, a ground-breaking work. It critically analyses the, for the most part, ordinary assumptions by which most of us in the developed world appear to live our daily, ordinary lives. These ordinary assumptions include rights of ownership, and the ability through ownership to fashion one’s own living environment, for example by being able to decorate, add to and modify one’s home, and therefore to express some agency about place, belonging and being; the capacity to engage in an economic system in such a way that allows a distance, an abstraction, a dissociation of the participant, including the participant’s body, from that which is being exchanged; as well as a more general ontology that identifies and establishes the personal, the private, the condition that this - whatever this might be - being mine, again, including one’s own body, and the intimate cradle of one’s self, and thus one’s soul. Our research about homelessness, we suggest, discloses these facets of our contemporary, mundane neoliberal experience as products of an economy of being that forges our beliefs and practices about who and what we are. This critical analysis, amounting to a philosophy, is engendered from the mundane experiences of a community of chronically homeless people; a community that we have known and been part of for over three years. For example: the taken for granted experiences of shopping and belonging are discussed through the prism of heroin dealers and addicts; the process of being a couple and wanting to have a family is understood via a homeless couple’s struggle to live together and have a baby; the attempt to achieve financial independence is discussed by way of enforcers who collect drug debts for organised criminals; and themes of intimacy and privacy are explored through the lives of homeless sex-workers. Whilst the daily events of the homeless people that populate this work are arresting enough in themselves, it is their implications, their ontological and political implications, that are most shocking and telling about the brutal and parlous state of contemporary first world society, and the growing number of marginalised and dispossessed that it begets. The appeal of this powerful work therefore extends beyond an ethnographic and sociological analysis of homelessness in urban Britain; it provides a concrete opening for those interested in a radical critique, at the quotidian level of realisation, of the current global crisis of neoliberal beliefs and forms of organization. There are no other books on the market that undertake this work in this intimate, gritty, disturbing and irreverent way. By way of structure it achieves this by foregrounding in each chapter the lives of specific homeless people, which illustrate and develop the themes of being homeless.

This is an Accepted Manuscript of a book chapter published by Routledge in The Philosophy of Homelessness: Barely Being on 6th August 2018, available online: http://www.routledge.com/9781138709737

Except where otherwise noted, this item's license is described as https://creativecommons.org/licenses/by-nc-nd/3.0/