Insights into HOx and ROx chemistry in the boreal forest via measurement of peroxyacetic acid, peroxyacetic nitric anhydride (PAN) and hydrogen peroxide 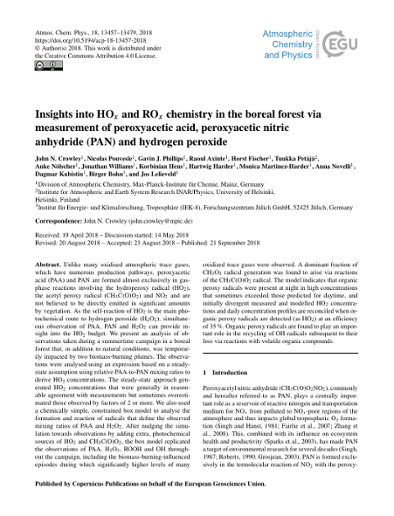 Unlike many oxidised atmospheric trace gases, which have numerous production pathways, peroxyacetic acid (PAA) and PAN are formed almost exclusively in gas-phase reactions involving the hydroperoxy radical (HO2), the acetyl peroxy radical (CH3C(O)O2) and NO2 and are not believed to be directly emitted in significant amounts by vegetation. As the self-reaction of HO2 is the main photochemical route to hydrogen peroxide (H2O2), simultaneous observation of PAA, PAN and H2O2 can provide insight into the HO2 budget. We present an analysis of observations taken during a summertime campaign in a boreal forest that, in addition to natural conditions, was temporarily impacted by two biomass-burning plumes. The observations were analysed using an expression based on a steady-state assumption using relative PAA-to-PAN mixing ratios to derive HO2 concentrations. The steady-state approach generated HO2 concentrations that were generally in reasonable agreement with measurements but sometimes overestimated those observed by factors of 2 or more. We also used a chemically simple, constrained box model to analyse the formation and reaction of radicals that define the observed mixing ratios of PAA and H2O2. After nudging the simulation towards observations by adding extra, photochemical sources of HO2 and CH3C(O)O2, the box model replicated the observations of PAA, H2O2, ROOH and OH throughout the campaign, including the biomass-burning-influenced episodes during which significantly higher levels of many oxidized trace gases were observed. A dominant fraction of CH3O2 radical generation was found to arise via reactions of the CH3C(O)O2 radical. The model indicates that organic peroxy radicals were present at night in high concentrations that sometimes exceeded those predicted for daytime, and initially divergent measured and modelled HO2 concentrations and daily concentration profiles are reconciled when organic peroxy radicals are detected (as HO2) at an efficiency of 35%. Organic peroxy radicals are found to play an important role in the recycling of OH radicals subsequent to their loss via reactions with volatile organic compounds.