Web-Based STAR E-Learning Course Increases Empathy and Understanding in Dementia Caregivers: Results from a Randomized Controlled Trial in the Netherlands and the United Kingdom 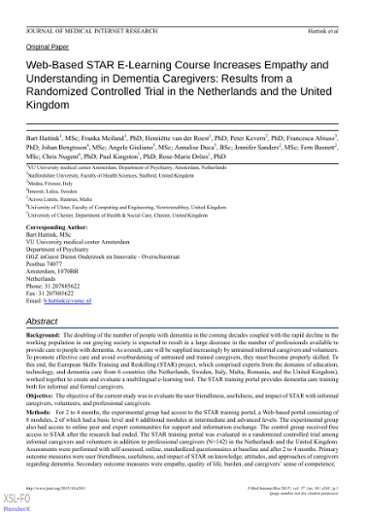 Background: The doubling of the number of people with dementia in the coming decades coupled with the rapid decline in the working population in our graying society is expected to result in a large decrease in the number of professionals available to provide care to people with dementia. As a result, care will be supplied increasingly by untrained informal caregivers and volunteers. To promote effective care and avoid overburdening of untrained and trained caregivers, they must become properly skilled. To this end, the European Skills Training and Reskilling (STAR) project, which comprised experts from the domains of education, technology, and dementia care from 6 countries (the Netherlands, Sweden, Italy, Malta, Romania, and the United Kingdom), worked together to create and evaluate a multilingual e-learning tool. The STAR training portal provides dementia care training both for informal and formal caregivers. Objective: The objective of the current study was to evaluate the user friendliness, usefulness, and impact of STAR with informal caregivers, volunteers, and professional caregivers. Methods: For 2 to 4 months, the experimental group had access to the STAR training portal, a Web-based portal consisting of 8 modules, 2 of which had a basic level and 6 additional modules at intermediate and advanced levels. The experimental group also had access to online peer and expert communities for support and information exchange. The control group received free access to STAR after the research had ended. The STAR training portal was evaluated in a randomized controlled trial among informal caregivers and volunteers in addition to professional caregivers (N=142) in the Netherlands and the United Kingdom. Assessments were performed with self-assessed, online, standardized questionnaires at baseline and after 2 to 4 months. Primary outcome measures were user friendliness, usefulness, and impact of STAR on knowledge, attitudes, and approaches of caregivers regarding dementia. Secondary outcome measures were empathy, quality of life, burden, and caregivers’ sense of competence. Results: STAR was rated positively by all user groups on both usefulness and user friendliness. Significant effects were found on a person-centered care approach and on the total score on positive attitudes to dementia; both the experimental and the control group increased in score. Regarding empathy, significant improvements were found in the STAR training group on distress, empathic concern, and taking the perspective of the person with dementia. In the experimental group, however, there was a significant reduction in self-reported sense of competence. Conclusions: The STAR training portal is a useful and user-friendly e-learning method, which has demonstrated its ability to provide significant positive effects on caregiver attitudes and empathy.