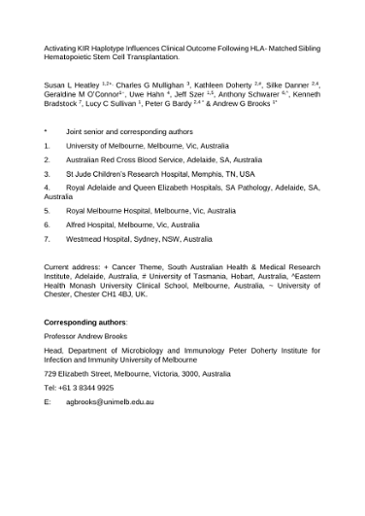 Natural killer cells are thought to influence the outcome of hematopoietic stem cell transplant (HSCT), impacting on relapse, overall survival, graft versus host disease and the control of infection, in part through the complex interplay between the large and genetically diverse killer immunoglobulin-like receptor (KIR) family and their ligands. This study examined the relationship between KIR gene content and clinical outcomes including the control of opportunistic infections such as cytomegalovirus in the setting of human leucocyte antigen (HLA)-matched sibling HSCT in an Australian cohort. The presence of the KIR B haplotype which contain more activating receptors in the donor, in particular centromeric B haplotype genes (Cen-B), was associated with improved overall survival of patients with acute myeloid leukemia (AML) undergoing sibling HSCT and receiving myeloablative conditioning. Donor Cen-B haplotype was also associated with reduced acute graft versus host disease grades II-IV whereas donor telomeric-B haplotype was associated with decreased incidence of CMV reactivation. In contrast, we were not able to demonstrate a reduced rate of relapse when the donor had KIR Cen-B, however relapse with a donor Cen-A haplotype was a competing risk factor to poor overall survival. Here we show that the presence of donor activating KIR led to improved outcome for the patient, potentially through reduced relapse rates and decreased incidence of acute GvHD translating to improved overall survival.

This is the peer reviewed version of the following article: Heatley, S. L., Mullighan, C. G., Doherty, K., Danner, S., O'Connor, G. M., Hahn, U., . . . Brooks, A. G. (2018). Activating KIR Haplotype Influences Clinical Outcome Following HLA-Matched Sibling Hematopoietic Stem Cell Transplantation. HLA, 92(2), which has been published in final form at https://doi.org/10.1111/tan.13327. This article may be used for non-commercial purposes in accordance with Wiley Terms and Conditions for Use of Self-Archived Versions