Oxidation processes in the eastern Mediterranean atmosphere: evidence from the modelling of HOx measurements over Cyprus 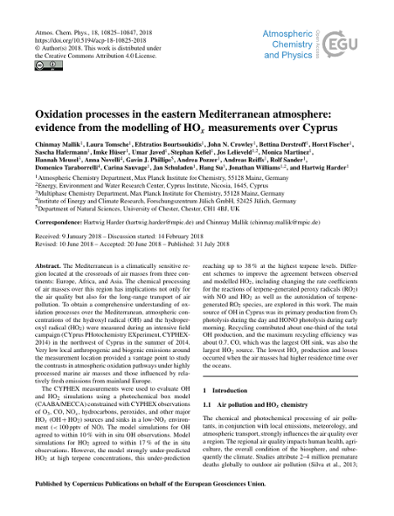 The Mediterranean is a climatically sensitive region located at the crossroads of air masses from three continents: Europe, Africa, and Asia. The chemical processing of air masses over this region has implications not only for the air quality but also for the long-range transport of air pollution. To obtain a comprehensive understanding of oxidation processes over the Mediterranean, atmospheric concentrations of the hydroxyl radical (OH) and the hydroperoxyl radical (HO2) were measured during an intensive field campaign (CYprus PHotochemistry EXperiment, CYPHEX-2014) in the northwest of Cyprus in the summer of 2014. Very low local anthropogenic and biogenic emissions around the measurement location provided a vantage point to study the contrasts in atmospheric oxidation pathways under highly processed marine air masses and those influenced by relatively fresh emissions from mainland Europe. The CYPHEX measurements were used to evaluate OH and HO2 simulations using a photochemical box model (CAABA/MECCA) constrained with CYPHEX observations of O3, CO, NOx, hydrocarbons, peroxides, and other major HOx (OH+HO2) sources and sinks in a low-NOx environment (<100pptv of NO). The model simulations for OH agreed to within 10% with in situ OH observations. Model simulations for HO2 agreed to within 17% of the in situ observations. However, the model strongly under-predicted HO2 at high terpene concentrations, this under-prediction reaching up to 38% at the highest terpene levels. Different schemes to improve the agreement between observed and modelled HO2, including changing the rate coefficients for the reactions of terpene-generated peroxy radicals (RO2) with NO and HO2 as well as the autoxidation of terpene-generated RO2 species, are explored in this work. The main source of OH in Cyprus was its primary production from O3 photolysis during the day and HONO photolysis during early morning. Recycling contributed about one-third of the total OH production, and the maximum recycling efficiency was about 0.7. CO, which was the largest OH sink, was also the largest HO2 source. The lowest HOx production and losses occurred when the air masses had higher residence time over the oceans.