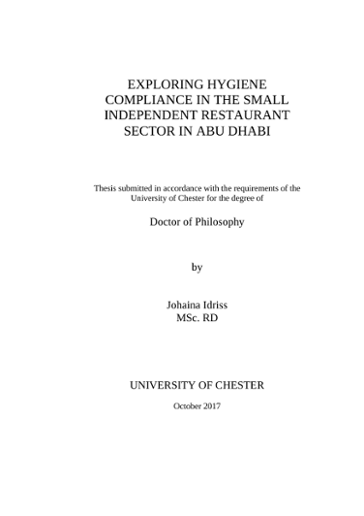 Introduction: Food safety is widely recognised as one of the problems in the fight for improving public health. Many governments are trying to improve public health through reducing foodborne illnesses and setting the climate for implementing HACCP-based food safety management systems (FSMS). Following the global trend, Abu Dhabi Food Control Authority (ADFCA) launched the HACCP for Catering Project (2010 – 2014), which aimed at helping foodservice businesses, licensed in the Emirate of Abu Dhabi, in implementing HACCP-based FSMS. Purpose: The project team recognised the limited resources and the diversity in education levels, ethnic backgrounds, and number of languages spoken among managers/supervisors and food handlers, as points of concern in the small independent restaurant (SIR) subsector. Thus, the Salamt Zadna (SZ) initiative, a simplified FSMS, was developed to train SIRs on implementing a set of safe operating procedures to improve compliance with food safety laws and regulations. Previous studies in the GCC region have mainly focused on governments’ attempts to enhance public health by developing laws, regulations, and policies, and recounting the barriers to implementing food safety controls. Methodology: This thesis took a different approach to food safety issues in the GCC region. It is comprised of two studies, which were conducted in two groups of SIRs – seven SZ participants and five non-participants – licensed in Al Ain, a major city in the Emirate of Abu Dhabi. The first explored awareness and understanding of food safety, related laws, regulations, and policies, and attitudes towards ADFCA services and inspectors, among managers/supervisors, by interviewing them. The second examined the efficacy of SZ in improving food handlers’ food-safety behaviours by observing their conduct, and comparing between the two SIR groups. Results: The study indicated low levels of awareness and understanding of food safety, related laws, regulations, and policies, in both groups of managers/supervisors; regardless of whether or not they were SZ Cparticipants. Both groups of interviewees expressed both negative and positive attitudes towards ADFCA’s services and inspectors; sometimes by the same interviewees, within the same, or between the two groups. However, SZ participating SIRs were slightly more positive than their counterparts. Key results highlighted the low impact of SZ on changing food handlers’ behaviours, except in two areas; namely, the food handlers working in SZ-participating SIRs scored higher than the other group in handwashing and changing gloves between handling raw meats and other foods. Implications: This research adds a new dimension to the food safety profile of the UAE, since it is the first of its kind in the UAE and the region as a whole. Its originality opens the door for other researchers to increase the volume of research in this field, which would help in understanding and tackling the barriers to improving the food safety status in the country, as well as the region.