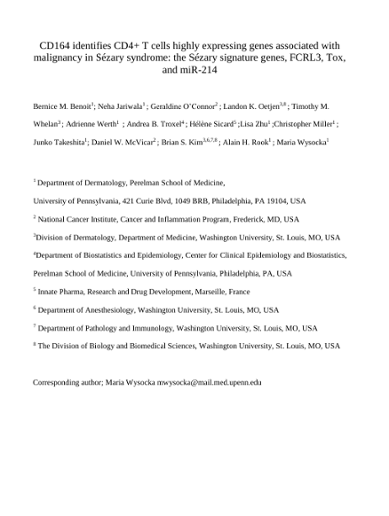 Sézary syndrome (SS), a leukemic variant of cutaneous T-cell lymphoma (CTCL), is associated with a significantly shorter life expectancy compared to skin-restricted mycosis fungoides. Early diagnosis of SS is, therefore, key to achieving enhanced therapeutic responses. However, the lack of a biomarker(s) highly specific for malignant CD4+ T cells in SS patients has been a serious obstacle in making an early diagnosis. We recently demonstrated the high expression of CD164 on CD4+ T cells from Sézary syndrome patients with a wide range of circulating tumor burdens. To further characterize CD164 as a potential biomarker for malignant CD4+ T cells, CD164+ and CD164−CD4+ T cells isolated from patients with high-circulating tumor burden, B2 stage, and medium/low tumor burden, B1–B0 stage, were assessed for the expression of genes reported to differentiate SS from normal controls, and associated with malignancy and poor prognosis. The expression of Sézary signature genes: T plastin, GATA-3, along with FCRL3, Tox, and miR-214, was significantly higher, whereas STAT-4 was lower, in CD164+ compared with CD164−CD4+ T cells. While Tox was highly expressed in both B2 and B1–B0 patients, the expression of Sézary signature genes, FCRL3, and miR-214 was associated predominantly with advanced B2 disease. High expression of CD164 mRNA and protein was also detected in skin from CTCL patients. CD164 was co-expressed with KIR3DL2 on circulating CD4+ T cells from high tumor burden SS patients, further providing strong support for CD164 as a disease relevant surface biomarker.