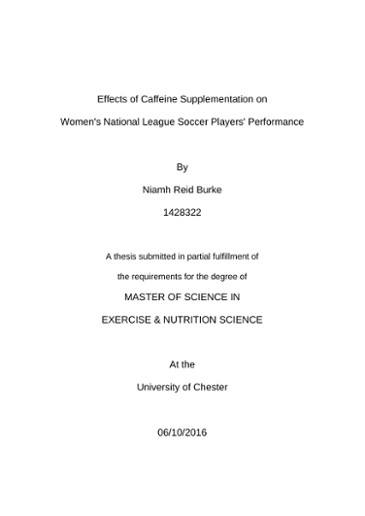 Purpose: To determine the effects of acute caffeine ingestion on female soccer players repeated-sprint performance, time to exhaustion, heart-rate, and rating of perceived exertion. Additionally, to investigate if habitual caffeine consumption effects supplementation results. Methods: Using a randomised double-blind research design, 18 females from the Women’s National League ingested two-tablets containing either caffeine (400 mg) or placebo (lactose) 1 hour before completing an indoor multiple-sprint test (12 x 30 metre; separated by 35 seconds rest), and a multi-stage fitness test (Yo-Yo Intermittent Recovery Test Level 2). Participants attended two-testing sessions 7-days apart and consumed either placebo or caffeine on the first session, and the opposite on the second testing session. Sprint-times were recorded using dual-beam photocells, time to exhaustion was measured in seconds and metres covered using interval recording on paper. Heart rate was monitored continuously, while RPE was measured after every third-sprint and every-minute during the multi-stage fitness test. Results: Sprint 3, 4, and 5 in the multiple-sprint test showed significant results (three sprints p=0.001, sprint 3: caffeine 7.58±1.36, placebo 7.61±1.33, sprint 4: caffeine 7.54±1.35, placebo 7.60±1.31, sprint 5: caffeine 7.56±1.36, placebo 7.60±1.32), while sprint 8 and 9 showed a tendency for faster times. Time to exhaustion was significantly improved with caffeine (p=0.0001, caffeine 428±209 seconds, placebo 345±122 seconds), heart-rate was not significantly different between trials as no interaction effect was found between trials (p=0.183), RPE overall wasn’t statistically different between trials (all values were p>0.005) with sprint 12 providing the only significant different rating of perceived exertion score (p=0.003, placebo 16.3±0.8, caffeine 15.7±0.9). Finally, habitual caffeine consumption wasn’t statistically different between conditions (time to exhaustion p=0.92, rating of perceived exertion p>0.005, heart-rate p>0.01, and multiple sprints p>0.004). Conclusion: Caffeine supplementation improves female soccer performance by means of increased time to exhaustion, tendency to improve multiple-sprint performance, and doesn’t affect heart-rate. Caffeine does not affect rating of perceived exertion, however, due to the increase in performance seen it is thought that unchanged RPE allows the body to work at higher intensities for longer. Finally, habitual caffeine consumption does not affect results as long as an abstention period of 48 hours is undertaken prior to matches. Take home message: Caffeine in a 400mg dose positively effects female soccer performance and minimal health risks or negative effects are associated with this supplementation. Caffeine produces a huge positive increase in endurance capacity, such as time to exhaustion, while also increasing the ability to perform at higher intensities for longer, reduced perception of effort.