Police officers’ beliefs about, and use of, cues to deception 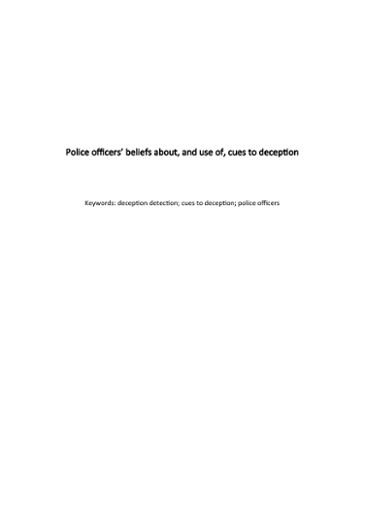 Meta-analytic findings indicate that people, including police officers, are generally poor at detecting low-stakes deception. Related to this, investigations of behaviours that people reportedly use to make truth/lie judgements tend to conclude that people rely on incorrect stereotypes. However, consistent findings suggest that police officers are able to detect high-stakes deception; this implies that, at least in some contexts, police officers utilise reliable cues to deception. The research presented here was an investigation of cues to deception used by police officers (N = 69), when making veracity decisions about real world, high stakes communications. Data were collected on both free report cues, and also prescribed cues that were known (from previous research), to discriminate between liars and truth-tellers in the communications that the police officers observed. Officers free reported using cues related to verbal content, emotion, body language, eyes, vocal cues, and external cues. Most prescribed cues were self-reportedly used correctly by large majorities of the officers, suggesting that they may not rely on inaccurate stereotypes. Self-report use of categories of free report cues, and prescribed cues, was not related to accuracy in detecting deception. As people may not always be aware of the behaviours on which their judgements are based, the relationships between some of the behaviours actually displayed in the communications, and group accuracy in detecting deception in those communications, were also investigated. Group accuracy was related to the presence of subjective, emotion-related cues in the communications.

This is the peer reviewed version of the following article: Wright, C., & Wheatcroft, J. M. (2017). Police officers’ beliefs about, and use of, cues to deception. Journal of Investigative Psychology and Offender Profiling, 14(3), 307-219. DOI: 10.1002/jip.1478 , which has been published in final form at http://onlinelibrary.wiley.com/doi/10.1002/jip.1478/full. This article may be used for non-commercial purposes in accordance with Wiley Terms and Conditions for Self-Archiving

Except where otherwise noted, this item's license is described as http://creativecommons.org/licenses/by-nd/4.0/