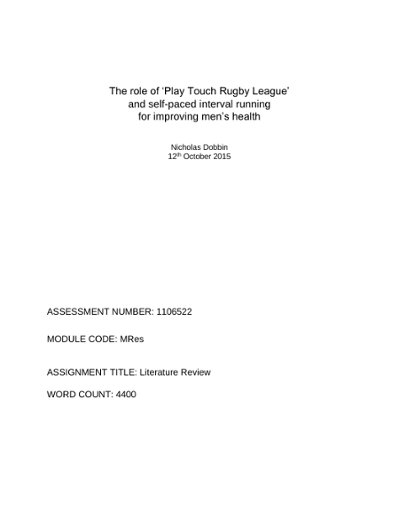 Over recent years, the use of team sports for health promotion has become a topical area of interest. Previous research has investigated the impact of small-sided games (SSGs) on cardiovascular, metabolic and musculoskeletal fitness, body composition, chronic systemic inflammation, enjoyment, social capital and adherence. However, research has primarily focused on inactive and/or diseased populations using interventions ranging from 8- to 40-weeks. With ‘time’ often being perceived as a ‘barrier’ to sports participation, prolonged interventions, like those typically used, might not appropriate to promote public health. Therefore, the aim of this study was to assess the impact of 4-weeks of Play Touch Rugby League (PTRL) and self-paced interval running (RUN) on several health markers within an active population. Sixteen men were recruited into a PTRL (n = 8) or RUN (n = 8) group and completed four consecutive weeks of PTRL or RUN. Health markers (resting heart rate (RHR), systolic (SBP) and diastolic (DBP) blood pressure, body mass, fat mass (FM), percentage body fat (%BF), fat free mass (FFM), waist circumference (WC), hip circumference (HC), waist-to-hip ration (WHR), body mass index (BMI), stress and inflammatory markers) were measured before and after the intervention period. During each session, participants wore a global positioning system (GPS) and heart rate monitor to record the internal and external demands of each session. The external demands varied between interventions, with the RUN group covering a larger total, low intensity and moderate intensity distance at a higher average velocity compared to the PTRL group. In contrast, the PTRL covered more high intensity distance and achieved a greater maximum velocity. After 4-weeks of PTRL and RUN, RHR, SBP and FM were likely lower. In contrast, only the PTRL group reported a lower %BF and higher FFM after 4-weeks. WC and HC were possibly lower after the RUN intervention but were likely and possibly higher at the PTRL intervention. Changes in C-reactive protein (CRP) were unclear after 4-weeks of RUN and PTRL, but interleukin-6 (IL-6) concentration was very likely lower in the PTRL group. Between groups differences for positive well-being, psychological distress and fatigue were unclear, but session RPE (sRPE) was likely lower during the PTRL intervention. In conclusion, 4-weeks of PTRL or RUN performed once per week, in addition to habitual physical activity, was sufficient to improve several markers of health in an active male population.