How Can It Be? Nietzsche, the Radical Water Practice of a Looked After Child, and the Established Order of the School 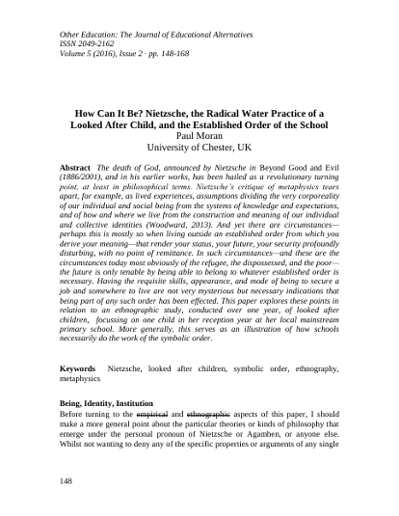 The death of God, announced by Nietzsche in Beyond Good and Evil (1886), and in his earlier works, has been hailed as a revolutionary turning point, at least in philosophical terms. More importantly, the same philosophical principle, announced in 1886, symbolically, culturally, politically and intellectually has come to represent an incision that fundamentally cuts out any metaphysical justification that ‘the order of things’, including, say, the economic and social order, is necessarily so, that is to say has been metaphysically given, as if ordained by God; and exposes in its place a complex, but at bottom, naked will to power; and also, therefore, that any such order of being is a fabrication of vested interests (Deleuze, 2006). The revolutionary significance of this finding, however, is not one of simply abstract and theoretical moment. Nietzsche’s critique of metaphysics tears apart, for example, as lived experiences, assumptions that divide the very corporeality of our individual and social being from the systems of knowledge and expectations, and of how and where we live from the construction and meaning of our individual and collective identities (Woodward, 2013). And yet there are circumstances, and perhaps this is mostly so when living outside an established order from which you derive your meaning, that render your status, your future, your security profoundly disturbing, with no point of remittance. In such circumstances – and these are the circumstances today most obviously of the refugee, the dispossessed, and the poor – the future is only tenable by being able to belong to whatever established order is necessary. Having the requisite skills, appearance, and basically mode of being to secure a job and somewhere to live are not very mysterious but necessary indications that being part of any such order has been effected. This paper explores these points in relation to an ethnographic study of looked after children over the course of around a year, focussing on one child in her reception year, at her local mainstream primary school. More generally, this serves as an illustration of how schools necessarily do the work of the symbolic order.

Moran, P., (2016). How can it be? Nietzsche, the radical water practice of a looked after child, and the established order of the school. Other Education: The Journal of Educational Alternatives, 5(2), 148-168.

Journal of Other Education