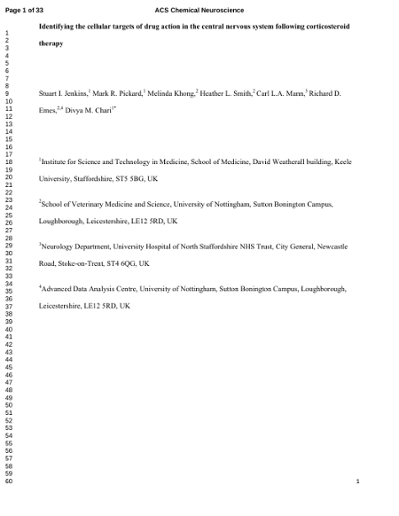 Corticosteroid (CS) therapy is used widely in the treatment of a range of pathologies, but can delay production of myelin, the insulating sheath around central nervous system nerve fibers. The cellular targets of CS action are not fully understood, that is, "direct" action on cells involved in myelin genesis [oligodendrocytes and their progenitors the oligodendrocyte precursor cells (OPCs)] versus "indirect" action on other neural cells. We evaluated the effects of the widely used CS dexamethasone (DEX) on purified OPCs and oligodendrocytes, employing complementary histological and transcriptional analyses. Histological assessments showed no DEX effects on OPC proliferation or oligodendrocyte genesis/maturation (key processes underpinning myelin genesis). Immunostaining and RT-PCR analyses show that both cell types express glucocorticoid receptor (GR; the target for DEX action), ruling out receptor expression as a causal factor in the lack of DEX-responsiveness. GRs function as ligand-activated transcription factors, so we simultaneously analyzed DEX-induced transcriptional responses using microarray analyses; these substantiated the histological findings, with limited gene expression changes in DEX-treated OPCs and oligodendrocytes. With identical treatment, microglial cells showed profound and global changes post-DEX addition; an unexpected finding was the identification of the transcription factor Olig1, a master regulator of myelination, as a DEX responsive gene in microglia. Our data indicate that CS-induced myelination delays are unlikely to be due to direct drug action on OPCs or oligodendrocytes, and may occur secondary to alterations in other neural cells, such as the immune component. To the best of our knowledge, this is the first comparative molecular and cellular analysis of CS effects in glial cells, to investigate the targets of this major class of anti-inflammatory drugs as a basis for myelination deficits.

This document is the Accepted Manuscript version of a Published Work that appeared in final form in ACS Chemical Neuroscience, copyright © American Chemical Society after peer review and technical editing by the publisher. To access the final edited and published work see http://dx.doi.org/10.1021/cn400167n