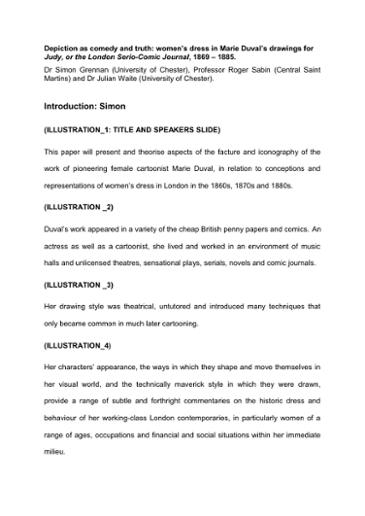 This paper will present and theorise aspects of the facture and iconography of the work of pioneering female cartoonist Marie Duval, in relation to conceptions and representations of women’s dress in London in the 1860s, 1870s and 1880s. Duval’s work appeared in a variety of the cheap British penny papers and comics of the 1860s-1880s. An actress as well as a cartoonist, she lived and worked in an environment of music halls and unlicensed theatres, sensational plays, serials, novels and comic journals. Her drawing style was theatrical, untutored and introduced many techniques that only became common in much later cartooning. She drew hundreds of comic strip pages for the magazine Judy and spin-off compilations, focusing on the humour, attitudes, urbanity and poverty of the types of people she knew. Her characters’ appearance, the ways in which they shape and move themselves in her visual world, and the technically maverick style in which they were drawn, provide a range of subtle and forthright commentaries on the historic dress and behaviour of her working-class London contemporaries, in particularly women of a range of ages, occupations and financial and social situations within this immediate milieu. First, the paper will consider the extent to which the facture of Duval’s drawings articulates relationships between constraint and liberation, in the ways in which she depicts women’s dress, utilising tracing techniques and briccolage, combined with a technically untutored style of drawing. She both cues readers to comedy (emerging as dissonance in her cutting and re-inscribing of contemporaneous fashion illustrations), and depicts embodied social discourse in the form of practices (as contemporaneous truths, in her deft manipulation of misrecognition), themselves generating a system of ideas, and creating a cognitive consensus connecting particular ideas with the behaviour of specific social groups. Second, the paper will consider Duval’s use of body distortion, accumulation, diminution and exaggeration, in which her depictive techniques present women’s dress not as a produced subject but as praxis. It will examine the complex parodic relationships that she creates between readers’ cultural knowledge of action on the contemporaneous theatre stage, in the practices of stage melodrama, and her depictions of women moving through her drawn plots in ‘old fashioned’ bonnets; of their noses; of the significant, ever-changing silhouettes of the carapaces of their chin-to-ankle dresses and of their feet, for example. Parallels will be identified between these Victorian ‘innovations’ and their continued use in twenty-first century ‘current’ and neo-Victorian’visual comedy. Finally, the paper will focus on the plots of Duval’s cartoons, identifying the general anonymity of Duval’s women characters relative to the developing visual identity of a single woman character who appears throughout: Judy herself, the muse and mistress of the magazine. It will present a close reading of a single frontispiece drawing of Judy from 1884, in which Judy rides an ostrich, in order to extrapolate a description of Duval’s cartoons of contemporaneous women that brings together facture, iconography and social milieu in order to understand both the unique processes of her comedy and her ability to depict the truth.

Dressing and Undressing the Victorians Conference, University of Chester

Except where otherwise noted, this item's license is described as http://creativecommons.org/licenses/by-nc/4.0/