Psychopathology and affect dysregulation across the continuum of psychosis: A multiple comparison group study 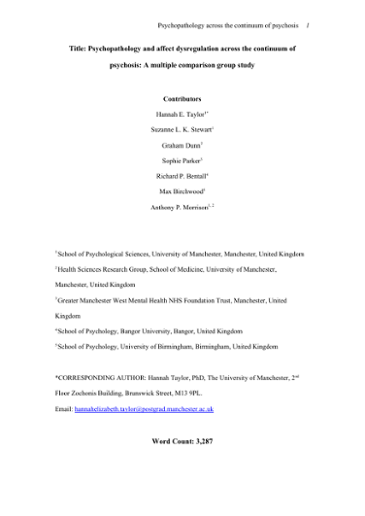 Aim: There is evidence that psychotic-like phenomena can be detected within the general population and that psychotic experiences lie on a continuum which also spans affective states. We aimed to investigate comparisons of a first episode psychosis group, an ‘at-risk mental state group’ and a help-seeking control group with non-patients to explore whether affective states lie on a continuum of psychosis. Method: Measures of psychotic-like experiences, social anxiety and depression were administered to 20 patients experiencing first episode psychosis (FEP), 113 patients experiencing an ‘at-risk’ mental state (ARMS), 28 patients who were help-seeking but not experiencing a FEP or ARMS (HSC) and 30 non-clinical participants (NC). Results: For distress in relation to psychotic-like experiences, the FEP, ARMS and HSC groups scored significantly higher than the NC group for the perceptual abnormalities and non-bizarre ideas. In terms of severity of psychotic experiences, the FEP scored the highest, followed by the ARMS group, followed by the HSC and NC group. The clinical groups scored significantly higher for depression than the non-clinical group. Interestingly, only the FEP and the ARMS group scored significantly higher than non-patients for social anxiety. Conclusions: These findings suggest that a psychosis continuum exists, however this does not suggest that both psychosis and affective symptoms lie on the same continuum, rather it would appear that the presence of such affective states that may affect help-seeking behavior and clinical status. The implications of these findings for clinical practice are discussed.

This is the peer reviewed version of the following article: Taylor, H. E., Stewart, S. L. K., Dunn, G., Parker, S., Bentall, R. P., Birchwood, M., & Morrison, A. P. (2014). Psychopathology and affect dysregulation across the continuum of psychosis: A multiple group comparison study. Early Intervention in Psychiatry, 8(3), 221-228. DOI: 10.1111/eip.12064, which has been published in final form at http://onlinelibrary.wiley.com/doi/10.1111/eip.12064/abstract. This article may be used for non-commercial purposes in accordance with Wiley Terms and Conditions for Self-Archiving