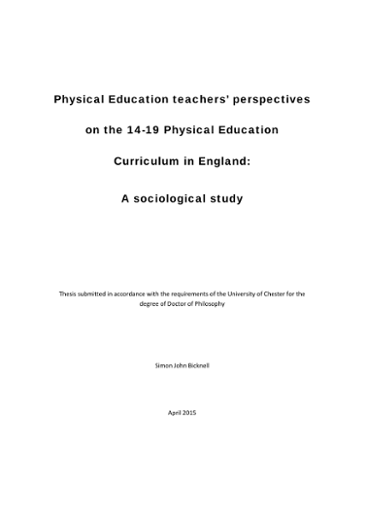 Over the last 40 years, there has been an expansion, what some have termed an “explosion” (Green, 2001) in the provision of Physical Education (PE) related qualifications, both academic and vocational, in English Secondary schools. In the context of the emergence and rapid growth of the 14-19 PE curriculum, a number of issues have emerged for both PE teachers and their pupils (Green, 2008). It is important to consider these issues and the implications for PE teachers and their pupils. This research study explored the perspectives of secondary school PE teachers towards the subject of PE within the 14-19 curriculum. Specifically, the research focused on PE teachers’ perceptions relating to (i) the broader social processes which have influenced the development of 14-19 PE, and (ii) the impact of the development of 14-19 PE for the subject of PE, PE teachers themselves, and their pupils in English secondary schools. 52 semi-structured interviews were completed over a 14 month period. The research participants, from 22 different secondary schools, consisted of both male and female PE teachers who held varying positions in schools, from PE teachers through Heads of PE to Assistant Headteachers and Headteachers. The research participants were aged between 23 to 59 years of age. The level of teaching experience ranged from between 3 months to 38 years, with 616 years of teaching experience between them. The primary data collected from the interviews were analysed both inductively and deductively. That is to say, first, using a ground theory methodology, emerging themes were identified that were ‘grounded’ within the data itself. Second, the sensitizing concepts offered by a figurational sociology perspective were used to interpret and ‘make sense’ of the themes emerging from the data. The key findings from this study have been broken down into two main themes. With regard to the first theme – PE teachers’ perspectives on the development of the 14-19 PE curriculum (in general, and in their schools in particular) – it was evident that there had been an expansion, over the last decade, of the accreditation opportunities available to more pupils, across more schools, through 14-19 PE, with the ‘drivers’ of such change being located within both ‘local’ and ‘national’ contexts. In terms of the second theme – PE teachers’ perspectives of the impact (both intended and unintended outcomes) of the development of PE within the 14-19 curriculum – it was evident that PE teachers’ views centred initially on the benefits of 14-19 PE for their pupils, and their departments and schools. However, it was evident that there were benefits to be had from 14-19 PE for PE teachers themselves, which meant a change in their ‘working climate’, although there were unplanned consequences also. For PE teachers this meant a change in their ‘work demands’. Sociologically speaking, it is suggested that 14-19 PE may be seen to have developed within a context of complex developmental processes, more specifically through networks of interdependency, characterised by power balances/ratios, and which have led to outcomes both intended and unintended. Specifically, it was suggested that the nature and purposes of PE and the role of PE teachers has markedly changed, indeed transformed. From the findings of this study, recommendations are proposed that focus upon policy implications and future developments, particularly in relation to the unintended outcomes of the development of 14-19 PE.