"The most astonishing triumphs": fresh light on primitive Methodist history, hagiography and detraction from northern Hampshire 1830-1852 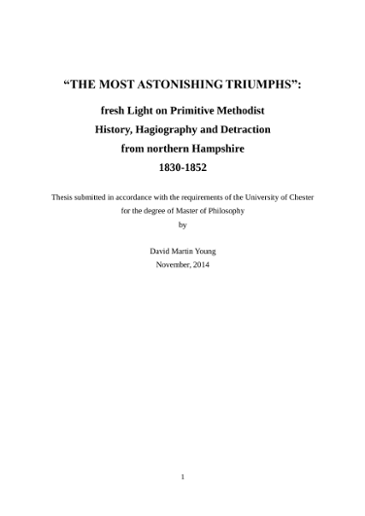 This thesis contributes both new historical research and revised perception of early PMism. It is set against the absence of any historical account of the coming of Methodism to northern Hampshire. Its aim and method are twofold: to research the events, personalities, beliefs, experience and ethos; and by comparing these findings with popular and academic eulogy and obloquy of PMs to correct them where they do not match the primary sources. This is not primarily an institutional or statistical study of the Connexion, nor of its national leadership, but is a local study of pioneers and ordinary believers and the extent to which they conform to what might be deemed hagiography or detraction. Having researched the history of the movement, and ascertained that it is homogeneous with the nationwide movement, the thesis argues that much literature, popular and scholarly, has given misleading depictions of the inner world of the movement. Some writers take their admiration too far, or construct a falsely admiring image of PMs in accord with their own priorities. This thesis looks honestly at phenomena omitted in such hagiography. Other writers, misinterpreting the phenomena or motivation, disapprove of certain aspects of the movement. Although the material studied is akin to that used by other scholars, the dissertation aims to contribute a different strand to academic study of the movement, applying its methodology both to a different geographical area, and to the Methodists' subjectivity, seeking thereby to add a component missing from other writings. It first reviews secondary writing which impinges upon the inquiries. The methodology is then explained, including the use of primary sources, and justifying the dissertation’s chronological and geographical parameters. After a summary of the social and religious situation in Hampshire, and an overview of the wider PM movement, there is an account of its spread and ethos in northern Hampshire and of the early stages of transition from the period of rapid expansion to a calmer modus operandi. In the ensuing critical discussion, the ethos of the movement, and the characters of its pioneers and members, are compared with admiring and derogatory depictions, both academic and popular, of Methodists from Victorian to modern times, which portray them as resplendent heroes, enlightened forerunners of feminism, or noble working-class political activists, or as obsessed with hell and judgement, hysterically emotional, clinging to survivals from superstitious folk religion, and gloomily repressive. This dissertation aims to demonstrate that the first generation of PMs in the four circuits of northern Hampshire do not wholly match those depictions, and, by correcting facts or perceptions, to construct a more rounded and faithful portrayal of the life-world, characters and achievements of the preachers and members.