Learning to Think in a Second Language: Effects of Proficiency and Length of Exposure in English Learners of German 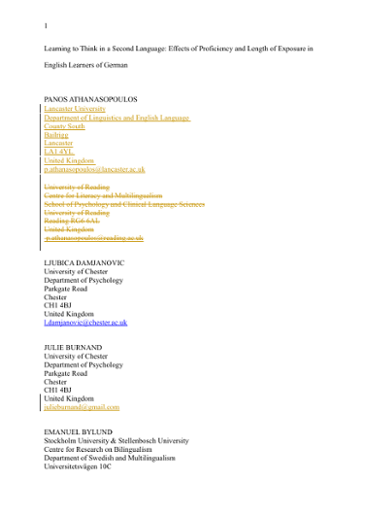 The aim of the current study is to investigate motion event cognition in second language learners in a higher education context. Based on recent findings that speakers of grammatical aspect languages like English attend less to the endpoint (goal) of events than do speakers of non-aspect languages like Swedish in a nonverbal categorization task involving working memory (Athanasopoulos & Bylund, 2013; Bylund & Athanasopoulos, 2015), the current study asks whether native speakers of an aspect language start paying more attention to event endpoints when learning a non-aspect language. Native English and German (a non-aspect language) speakers, and English learners of L2 German, who were pursuing studies in German language and literature at an English university, were asked to match a target scene with intermediate degree of endpoint orientation with two alternate scenes with low and high degree of endpoint orientation, respectively. Results showed that, compared to the native English speakers, the learners of German were more prone to base their similarity judgements on endpoint saliency, rather than ongoingness, primarily as a function of increasing L2 proficiency and year of university study. Further analyses revealed a non-linear relationship between length of L2 exposure and categorization patterns, subserved by a progressive strengthening of the relationship between L2 proficiency and categorization as length of exposure increased. These findings present evidence that cognitive restructuring may occur through increasing experience with an L2, but also suggest that this relationship may be complex and unfold over a long period of time.

This is the peer reviewed version of the following article: Athanasopoulos, P., Damjanovic, L., Burnand, J., & Bylund, E. (2015). Learning to think in a second language: Effects of proficiency and length of exposure in English learners of German. The Modern Language Journal, 99(S1), 138-153 , which has been published in final form at DOI: 10.1111/j.1540-4781.2015.12183.x . This article may be used for non-commercial purposes in accordance with Wiley Terms and Conditions for Self-Archiving