The implementation of the elite player performance plan: A sociological study of the experiences of education and welfare officers and coaches 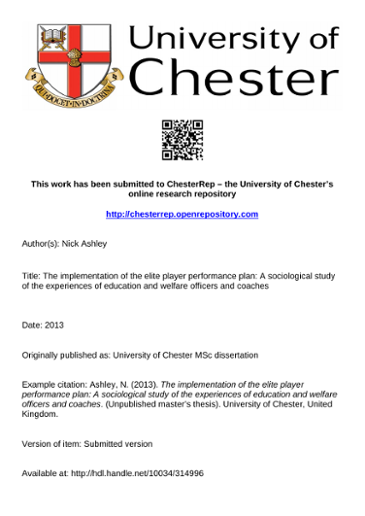 The recent poor performances of the English national side during the 2010 World Cup in South Africa and the European Championships in 2012, have caused journalists, fans and footballing figures to create a supposed moral panic for the state of the national game. A large part of the blame has fallen on our youth development systems accounting for the lack of young home-grown talent breaking into the first team squads of some of the country’s most successful clubs (Gibson, 2013; Independent, 2013; Sky Sports, 2013; Telegraph, 2013b). There have been various attempts to explain the lack of home-grown talent progressing through into the professional game in this country. The two of the most recognised arguments revolve around the influx of foreign players into the domestic leagues (Independent, 2013; Sky Sports, 2013; Telegraph, 2013b) and the quality of coaching (Football Association, 2008; McGowan, 2010; Premier League, 2011). In an attempt to tackle the supposed barriers to the success of young players, the Premier League (PL) in conjunction with the Football Association (FA) and Football League (FL) have sought to cultivate a new youth development system – the Elite Player Performance Plan (EPPP). Previously, under the Charter for Quality, youth professional football had been allowed to wane due to a lack of monitoring and evaluation of current practices (Brooking, 2007). As a result, the standards of football clubs varied greatly throughout the PL and FL (Brooking, 2007; Lewis, 2007). Moreover, due to the lack of direction from the governing bodies, football clubs have developed young players in ways which suited the club - which has accounted for the sporadic numbers of players progressing through over recent years (Lewis, 2007; McGowan, 2010). In response, the introduction of the EPPP is an attempt to address these apparent shortcomings by standardising and modernising coaching practices, recruitment practices and facility provision in order for clubs to create greater access to younger players (PL, 2011). Most recently in a speech by Greg Dyke, the new FA chairman, youth football, and the EPPP has been hailed as playing a pivotal role in the development of the national game (Bond, 2013; Telegraph, 2013b; Winter, 2013). As a result of Dyke’s speech, the England senior squad are being handed new key performance indicators: a semi-final appearance in the 2020 European Championships and a World Cup trophy in the 2022 games, in which the £320 million EPPP is supposed to be the catalyst for attaining such ambitious goals (Winter, 2013). With such a high level of expectation on the EPPP to improve the standard of youth professional football, it is important for us to understand how the EPPP has been implemented within clubs. However, given how recent its inception is within youth professional football there is currently no existing published sociological work surrounding the initiative. Therefore, in an attempt to broaden youth professional football research, the objective of this study is to examine the experiences of key stakeholders within youth professional football, namely education and welfare officers (EWOs) and coaches, to assess how they have implemented the EPPP within their respective clubs. The success of the EPPP is reliant on the compliance of such stakeholders to implement the initiative at club level. As such, the central objectives of this study are to: i) examine how EWOs and coaches have experienced implementing the EPPP within their respective clubs; ii) explore the ways in which the EPPP has affected the existing roles of EWOs and coaches; and iii) reflect upon how the implementation of the EPPP has differed throughout the PL and FL. In order to examine the central objectives of the study, the thesis will be broken down into five chapters. The first chapter reviews the existing literature that surrounds youth professional football highlighting the three major themes of research in the area: the culture of professional football, educational provisions and players’ perceptions of education and player welfare and safeguarding. The chapter also reveals, given how recently the EPPP has been introduced, there is currently no existing literature surrounding it, creating a rationale to undertake this study. The second chapter of the thesis focuses on the EPPP itself, and what changes have been made to youth professional football compared to the previous youth system the Charter for Quality. Additionally, given the thesis aims to measure the implementation of the EPPP, the later part of the chapter outlines the policy process in order to give the reader some perspective when making reference to compliance levels and the ways in which the EPPP has been implemented by the EWOs and coaches within their respective clubs. Chapter three explains the theoretical framework, namely figurational sociology, that will be used to help explain the experiences of EWOs and coaches implementing the EPPP at their respective clubs. The chapter will highlight Elias’ core concepts of figurational sociology which the researcher believes will help make sense of the attitudes of EWOs and coaches towards the initiative and the reasons why its compliance has varied between clubs.