A mixed methods study of the early development of childhood overweight and obesity: Understanding the process of infant feeding 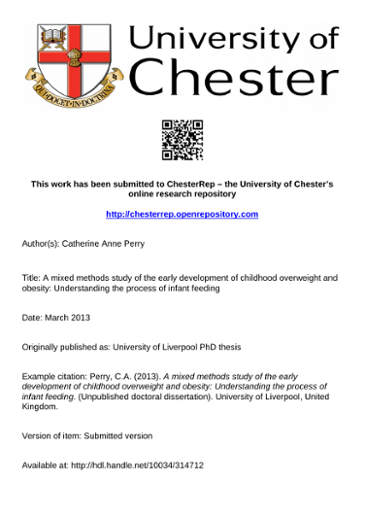 Prevalence of overweight and obesity has increased in adult and child populations during the last two to three decades in both developed and developing countries. Childhood obesity is common in the United Kingdom and has become a major public health issue. There is a growing body of evidence to suggest that the development of overweight and obesity in children has its roots in early life, with evidence of increasing weight over time in pre-school children. The study explored the early development of overweight in infants in Halton, an area of Northwest England. It was a mixed methods study comprising a quantitative analysis of routinely collected infant weight data and a longitudinal qualitative study of the process of weaning. Phase one - patterns of weight in Halton infants: The retrospective quantitative study utilised birthweight, and weight and length/height at eight weeks, eight months and 40 months of age from Halton infants born between 1994 and 2006 (16,328 singleton births). Analysis of these data provided further evidence of the early development of overweight, and highlighted patterns of infant overweight at eight months of age not previously reported. Phase two - longitudinal qualitative study of the process of weaning: Given the findings of phase one, factors that may influence early weight gain were considered. Therefore, the second phase focussed upon weaning, which has been little researched in terms of the way in which mothers manage the process. The aim was to explore weaning as a social process, focussing on the experience, knowledge, perceptions and actions of mothers as they weaned, in order to consider whether this could shed light on infant growth and development in general and the early development of overweight in particular. A grounded theory approach was utilised. Twenty one women were recruited and interviewed antenatally and then up to three times after their babies were born. A total of 67 interviews took place. A grounded theory, or ‘plausible account’, of the weaning process was developed. The centrality of the baby, and the way in which mothers talk about following the lead of the baby as they wean was highlighted, along with the ways in which this focus may falter or shift because of the complexity of influences on mothers’ lives. The primacy of embodied knowledge, that is the knowledge that mothers built up through the experience of feeding and weaning their infant, and the significance of being a mother in terms of being an ‘authority’ on feeding and weaning, were evident. In addition, the limitations of providing information, such as the feeding and weaning guidelines, without taking account of the individual mother, infant and their context was indicated. This is how some mistrust of the advice of health professionals, and possibly other ‘health messages’ emerged, as mothers did not see the advice as appropriate to them, their infant, or circumstances. Mothers did recognise babies as ‘bigger’ or ‘smaller’, but through valuing weight and weight gain were particularly aware of having small babies, which may have limited their capacity for recognising the significance of early signs of overweight in their infants. Final conclusions: Using mixed methods in this study allowed a broad picture of patterns of weight and overweight in Halton infants, and what some of the contributory factors to those patterns might be, to emerge, than if a single research method had been used. A number of implications for policy and practice: at an individual level in terms of the way in which women are supported to feed and wean their babies; and at a population level in terms of the monitoring of weight, were identified.