A longitudinal analysis of performance, growth and maturation in youth rugby league players: Implications for talent identification and development 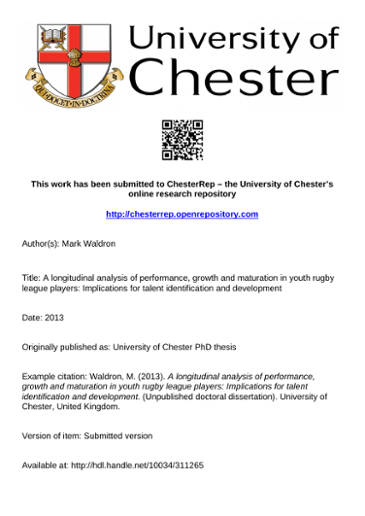 This study monitored a cohort of youth rugby league players from one professional club in England, across three competitive seasons (under-15 to under-17 age group). The aims were to establish which dimensions of growth and performance characterized players who were either coach-selected or unselected each season and to evaluate annual developments in growth and performance. It was also necessary to establish the credibility of various measurement techniques that are implicated in the talent identification process. In the assessment of sprint performance, GPS measurements systematically underestimated both distance and timing gate speed but can be used to reliably evaluate sprint performance, particularly for measurements of peak speed (95% Limits of Agreement (LoA) = 0.00 ± 0.8 km·h-1; CV = 0.78%). Using a larger sample of youth team sport players (n = 60), multiple linear regression analysis, incorporating mean and peak GPS speeds as predictors of timing gate speed, yielded a prediction model that was able to provide a valid alternative to timing gates in the assessment of sprint performance over 30 m. With regards to the reliability of assessments of sport-specific skill in youth rugby league players, no comparisons met the pre-determined analytical goal of ‘perfect agreement’, meaning that up to 56% of players’ skill could be misinterpreted. The credibility of such assessments should be questioned and alternative tests considered. In the period between the under-15 and under-16 group, there were large annual increments in speed (5.02 Δ%), force (13.82 Δ%) and power (19.85 Δ%) generated over 10 m sprint intervals and predicted vertical jumping power (13.02 Δ%), with concomitant developments in body mass (5.14 Δ%), lean body mass (3.20 Δ%) and predicted muscle of the quadriceps (10.12 Δ%). A discriminant function analysis also highlighted 30 m force and 10 m acceleration as significant predictors of selected players in the under-15 group and under-16 group, explaining 47.3% and 40.7% of the between-group variance, respectively – which was the case independent of age at peak maturity. However, there were 5 no differences between selected and unselected players in the under-17 group. During match time, there were differences between selected (57.1 ± 11.9 min) and unselected (44.1 ± 12.3 min) players for average playing interval in the under-16 group. In turn, selected players covered more total distance (5181.0 ± 1063.5 m c.f. 3942.6 ± 1108.6 m, respectively; P = 0.012) and high intensity distance (1808.8 ± 369.3 m c.f. 1380.5 ± 367.7 m, respectively; P = 0.011) than unselected players. When age at peak height velocity (PHV) was statistically controlled, only distance in zone 3 and summated-HR remained higher in the selected players of the under-16 group. Conversely, higher values amongst the unselected under-16 players for total and relative distance in zone 4, 5 and high intensity were revealed. There was a relationship in the under-15 group (R = 0.702, P < 0.001), under-16 group (R = 0.607, P < 0.001) and under-17 group (R = 0.671, P < 0.006) between the number of successful ball carries and 10 m sprinting force, thus supporting the use of 10 m sprinting force as a predictor of match performance. The relationship (r = 0.51, P = 0.044) between aerobic capacity and HIT·min-1 in the under-17 group also provides preliminary evidence of aerobic endurance as a potential predictor of match running intensity. It was concluded that players who are coach-selected are not characterized by match related performance variables but are offered greater match exposure during the under-16 age group, resulting in larger running distances. Unselected players are unrewarded for higher intensity running during matches when maturational age is statistically controlled and are also equally effective in regard to tackling and ball carrying outcomes. These results collectively indicate the inability of match performance measurements to contribute to talent identification processes in players of this type. The changes in growth and performance should be used to guide talent development practices of rugby league coaches. In particular, the assessment of force (i.e. the product of acceleration and body mass) should be considered as an important factor in differentiating between higher and lower ability players, as well as relating to match performance.