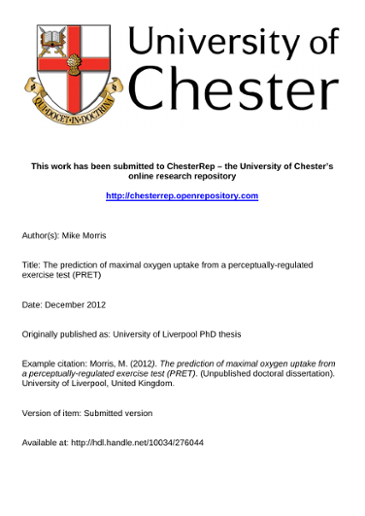 The Borg 6–20 rating of perceived exertion (RPE) scale is a common measure reported during exercise testing and training, and is usually taken as a response measurement to provide a subjective assessment of exercise intensity. A lesser used application of the scale is for regulating exercise intensity, referred to as its ‘production mode’. Recent research on this topic initiated by Eston et al. (2005) has led to a novel application of this procedure as a means of predicting an individual’s maximal oxygen uptake ( O2max) via a perceptually-regulated exercise test (PRET). The PRET could play a significant role in guiding exercise prescription and monitoring cardiorespiratory fitness levels in situations where the normal heart rate response is affected. The aim of this thesis is to develop further and test the integrity of the PRET technique. Firstly, a review of the evidence on the validity and reliability of the Borg RPE scale when used to regulate exercise intensity in healthy and unhealthy adults is presented, as to-date, no scholarly publication has synthesised the body of knowledge on this specific application of the scale. Subsequently, four studies were completed to investigate the effects of different methodological variations on the predictive capabilities of the PRET, including an examination (for the first time) of its utility among heart failure patients (Study 4). Study 1 re-visited the validity and reliability of the PRET technique utilising a modified protocol of differing durations (2 and 4 min bouts), with revised instructions and placing the graded exercise test (GXT) as the final trial during cycle ergometry. Superior results were observed to those reported in previous investigations (Eston et al., 2008; Faulkner et al. 2007; Eston et al., 2006) during the 3 min trial, further reinforcing the validity and reliability of this technique. Accordingly, Study 2 was the first to investigate the reliability and validity of a treadmill PRET protocol with a ceiling intensity of RPE 15, rather than RPE 17, and observed that a safer modified PRET (with practice) provides acceptably valid and reliable predictions of O2max in healthy adults. In addition, Study 3 extended the research thus far by investigating the PRET protocol during cycle exercise, once again with a ceiling intensity of RPE 15, and demonstrated that (with practice) a cycle-based PRET can yield reliable and valid predictions of O2max that compare favourably to previous investigations. Finally, given that the research employing a PRET has unanimously alluded to its likely value in clinical populations among whom heart rate as a physiological response to exercise is affected (e.g. via medication) and precluded as a means predicting O2max, Study 4 investigated the utility of a PRET in a beta-blocked population of heart failure patients. In the event, it was observed that a PRET (up to RPE 15) was too strenuous and needs to be capped at an intensity of RPE 13 in this population. In addition a continuous protocol seemed unsuitable due to its length and it was recommended that a discontinuous PRET protocol be investigated. Future research needs to investigate the utilisation of the PRET (i) in different exercise modes; (ii) determine the optimum number of practice trials required; (iii) whether a discontinuous or continuous protocol is more appropariate; (iv) whether the extrapolation should be made to RPE 19 or 20 and; (v) whether the PRET can be employed succesfully in other clinical populations.