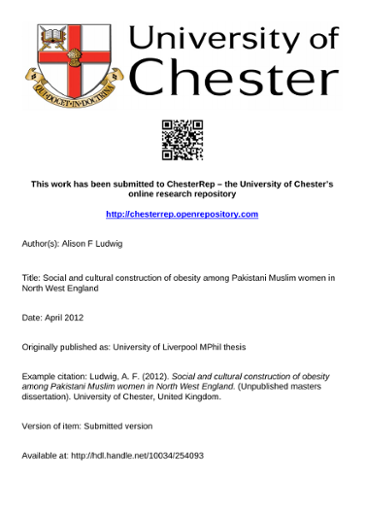 Higher rates of obesity, Type 2 diabetes and coronary heart disease are observed in British Pakistani women compared to the general UK population. This qualitative research explored the links between the participant’s understanding of health risks related to obesity, body image and dietary patterns in a cohort of first- and second-generation Pakistani women, living in Greater Manchester, England. Pakistani women act as gatekeepers to family nutrition and health. The research aims to inform promotion strategies, focusing on healthier changes, and to create increased levels of awareness of the strategies. Beyond South Asian [SA] languages, effective and ethnically appropriate approaches are essential to reach these goals. Research outcomes can no longer just be interesting or show potential, as they ought to contribute to improving women’s health and advice public health professionals when making relevant recommendations. Qualitative techniques, using focus groups and one-to-one interviews, with 55 women, were recruited from the Pakistani community via snowballing and cold calling at community and resource centres. The participants were either active in their local communities or were deemed “hard to reach” in relation to accessibility. The interviews were conducted in the participants’ homes or at the venues. Third-person fictitious vignettes were used to stimulate and promote discussion. A series of vignettes were intended to resonate with the participant’s own lives. The interviews were audio-recorded, transcribed then analysed. One researcher as a community insider and the other as an outsider, along with sociological analysis, reflected upon then coded the data. Using ethnography and an interpretive, phenomenological framework, allowed for data description and interpretation of an emerging understanding. The rich data uncovered issues relating to faith, family and broader socio-cultural influences, all of which had an impact on daily life and in particular to food choices. Despite an acknowledgement of obesity in themselves and around them, there appeared to be a lack of awareness linking obesity to health outcomes. The participants in both generations turned to and, in part, relied upon both traditional food and western health beliefs. As an outcome of the data analysis, a multi-directional theoretical model was developed specifically for this group of women in Manchester, called the Health Action Transition (HAT) model. The HAT model is intended to be used as a working tool in a clinical setting to aid in understanding of the Pakistani women’s socio-cultural structures and to provide a framework for recommendations relating to health promotion for these women.

Sponsored by University of Liverpool