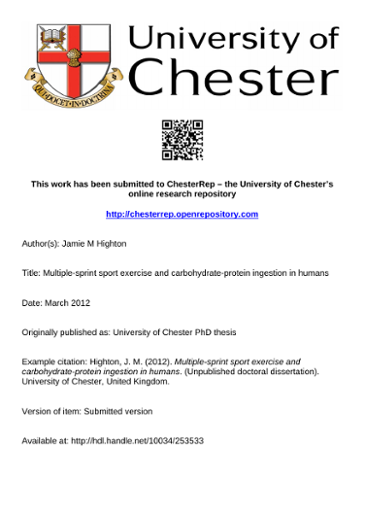 The aim of the present thesis was to examine the potential for acute carbohydrate-protein (CHO-P) ingestion to enhance performance and recovery from exercise designed to simulate the demands of multiple-sprint sports (MSSs). Chapter 3 of the thesis explored the inter- and intra-day reliability and concurrent validity of non-motorised treadmill ergometry (NMT) for the assessment of short-distance sprint performance [i.e. 10-30 m). There were no significant mean differences between NMT variables recorded on the same day or between days. Ratio limits of agreement indicated that the best agreement was in 20 [1.02 */-=- 1.09) and 30 m [1.02 */* 1.07) sprint times, peak [1.00 */T 1.06) and mean (0.99 */+ 1.07) running speed and step length (0.99 */-=- 1.09) and frequency (1.01 */+ 1.06). The poorest agreement was observed for time to peak running speed (1.10 */* 1.47). Significant differences were observed between NMT and over-ground sprint times across all distances, with times being lower (faster) by approximately 25-30% over-ground. The correlations between NMT and over-ground variables were generally modest (r5 = 0.44 - 0.67), and optimal for time to cover 30 m on Day 2 (rs = 0.8). Chapter 4 sought to examine the efficacy of CHO-P ingestion during 4 h of recovery from the Loughborough Intermittent Shuttle Test (LIST) when compared to CHO matched for energy (ISOEN) or CHO (ISOCHO) in a typical CHO beverage. There were significant increases over time in muscle soreness, and reductions in extensor and flexor peak torque (by approximately 9%, 9% and 8%, and 13 %, 13% and 11% at 60 deg-s-1) and jump performance (10%, 7% and 5%) with the ingestion of CHO-P, ISOEN and ISOCHO, respectively. Beverage type x time interactions were not significant for any of these variables, indicating that changes in each variable were similar for all groups. Decrements in sprint performance assessed on the NMT were typically small and not different between beverage types (<4%), although sprint times over 20 and 30 m remained elevated for 48 h post-exercise. Accordingly, Chapter 4 provided no clear evidence for a benefit of ingesting CHO-P in the hours after exercise to enhance recovery of muscle function and selected performance variables following MSS activity. Chapters 5 and 6 of the thesis aimed to examine the effect of CHO-P ingestion during simulated MSS exercise. In Chapter 5, it was observed that sprint times, HR and gut fullness increased over the course of the LIST, with no influence of consuming each of the different beverages. In contrast, there was a main effect of time (P < 0.001), and drink (P = 0.042) observed for RPE, which was lower (P < 0.001) during the LIST in the CHO-P condition (16.9 ± 1.4) than in either the ISOCHO (17.8 ± 1.1) or ISOEN (17.7 ± 1.3). However, time to exhaustion was not different (P = 0.29) between CHO-P (468.3 ± 268.5 s), ISOCHO (443.4 ± 286.3 s) and ISOEN (446.2 ± 282.08 s), although these times did equate to a non-significant mean improvement of 4% in the CHO-P trial. Chapter 6 demonstrated that during a modified version of the LIST with two self-regulated blocks of exercise intensity, participants had a higher average speed (8.1 ± 0.3 cf. 7.9 ± 0.5 knvlr1) during the final (self-regulated) 15 min block of the LIST in the CHO-P condition compared to CHO. Whilst the mechanisms for such an improvement are not certain, the attenuated rise in RPE observed in Chapter 5, and increased blood urea concentration observed in Chapter 6, with CHO-P ingestion may suggest altered central fatigue and/or increased protein oxidation enhances performance during MSSs.