Images of the witch in nineteenth-century culture 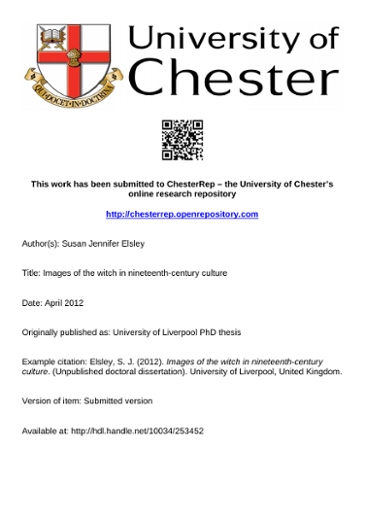 This thesis examines the witch imagery used during the nineteenth century in children’s literature, realist and gothic fiction, poetry and art, and by practitioners and critics of mesmerism, spiritualism and alternative spirituality. The thesis is based on close readings of nineteenth-century texts and detailed analysis of artwork, but also takes a long view of nineteenth-century witch imagery in relation to that of preceding and succeeding periods. I explore the means by which the image of the witch was introduced as an overt or covert figure into the work of nineteenth-century writers and artists during a period when the majority of literate people no longer believed in the existence of witchcraft; and I investigate the relationship between the metaphorical witch and the areas of social dissonance which she is used to symbolise. I demonstrate that the diversity of nineteenth-century witch imagery is very wide, but that there is a tendency for positive images to increase as the century progresses. Thereby the limited iconography of malevolent witches and powerless victims of witch-hunts, promulgated by seventeenth-century witch-hunters and eighteenth-century rationalist philosophers respectively, were joined by wise-women, fairy godmothers, sorceresses, and mythical immortals, all of whom were defined, directly or indirectly, as witches. Nonetheless I also reveal that every image of the witch I examine has a dark shadow, despite or because of the empathy between witch and creator which is evident in many of the works I have studied. In the Introduction I acknowledge the validity of theories put forward by historians regarding the influence of societal changes on the decline of witchcraft belief, but I argue that those changes also created the need for metaphorical witchery to address the anxieties created by those changes. I contend that the complexity of social change occurring during and prior to the nineteenth century resulted in an increase in the diversification of witch imagery. I argue that the use of diverse images in various cultural forms was facilitated by the growth of liberal individualism which allowed each writer or artist to articulate specific concerns through discrete images of the witch which were no longer coloured solely by the dictates of superstition or rationalism. I look at the peculiar ability of the witch as a symbolic outcast from society to view that society from an external perspective and to use the voice of the exile to say the unsayable. I also use definitions garnered from a wide spectrum of sources from cultural history to folklore and neo-paganism to justify my broad definition of the word ‘witch’. In Chapter One I explore children’s literature, on the assumption that images absorbed during childhood would influence both the conscious and unconscious witch imagery produced by the adult imagination. I find the templates for familiar imagery in collections of folklore and, primarily, in translations of ‘traditional’ fairy tales sanitised for the nursery by collectors such as Perrault and the Brothers Grimm. I then examine fantasies created for Victorian children by authors such as Mary de Morgan, William Makepeace Thackeray, George MacDonald and Charles Kingsley, where the image of witch and fairy godmother is conflated in fiction which elevates the didactic fairy tale to a level which in some cases is imbued with a neo-platonic religiosity, thereby transforming the witch into a powerful portal to the divine. In contrast the canonical novelists whose work I examine in Chapter Two generally project witch imagery obliquely onto foolish, misguided, doomed or defiant women whose witchery is both allusionary and illusionary. I begin with the work of Sir Walter Scott whose bad or sad witches touch his novels with the supernatural while he denies their magic. Scott’s witch imagery, like that of Perrault and Grimm, is reflected in the witches who represent women’s exclusion from autonomy, education and/or the literary establishment in the works of Charlotte and Emily Brontë, Elizabeth Gaskell and George Eliot. Traditional fairy-tale imagery is particularly evident in Charles Dickens’ use of the witch to represent negative aspects in the development of society or the individual. In contrast Scott’s impulse to distance himself from the pre-urban world represented by his witches contrasts with Thomas Hardy’s mourning of the female earth spirits of Wessex, thereby linking fluctuating and evolving images of nature with images of the nineteenth-century witch. In Chapter Three I explore poetry and art through Romantic verse, Tennyson’s Camelot, Rossetti and Burne-Jones’ Pre-Raphaelite classicism, Rosamund Marriot Watson and Mary Coleridge’s shape-shifting, mirrored women, and Yeats’ Celtic Twilight: in doing so I find representations of the witch as the destructive seductress, the muse, the dark ‘other’ of the suppressed poet, the symbol of spellbinding amoral nature, and the embodiment of the Celtic soul. In the final chapter witch imagery is attached to actual practitioners of so-called ‘New Witchcraft’, yet they also become part of a story which seeks to equate neo/quasi science with the supernatural. I demonstrate a gender realignment of occult power as the submissive mesmerist’s tool evolves into the powerful mother/priestess. I note the interconnectedness of fiction and fact via the novels of authors such as Wilkie Collins and Edward Bulwer-Lytton; and identify the role of the campaigning godmother figure as a precursor of the radical feminist Wiccan. I believe that my thesis offers a uniquely comprehensive view of the use of metaphorical witch imagery in the nineteenth century.