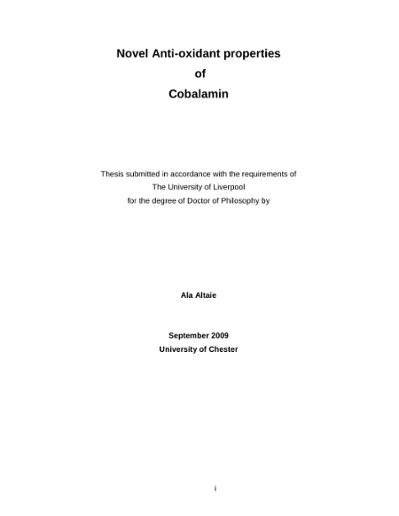 Oxidative stress has been associated with a wide range of diseases, including cardiovascular diseases, Alzheimer's disease, atherosclerosis, Parkinson's disease and cancer. It also plays a role in the ageing process. Hyperhomocysteimia is commonly found to be associated with these diseases. The hyperhomocysteimia is a result of a deficiency in both folate and cobalamin Folate is known to reduce Hey and protect cells from apoptosis, but there are no studies investigating the impact of cobalamin on apoptosis induced by oxidative stress or the mechanism(s) of the protection. The aims of the research are to investigate the protective role of cobalamin and the possible mechanism(s) for this protection. It also examines the protective role of novel cobalamin and investigates their superior protection. The methods used in this research for apoptosis detection we used caspase-3 and the annexin-V, while for necrosis we used PI staining, where cell viability were detected using MTS assay. We also measured the generation of superoxide by Lucigenin-enhanced chemiluminescence and reactive oxygene species by using the redox active prob DCFH-DA. Moreover, the intracellular proteins were measured via staining with specific fluorescent-conjugated antibodies were detected using flowcytometry. Our result demonstrated that 25|iM of cobalamin protects cells from apoptosis. The protection by cobalamin was associated with induction of iHsp72 and iHO-1, and these are shown to be essential for the protection. Furthermore, our research demonstrated a novel mechanism of cobalamin-apoptosis protection involving induction of NfkB, ERK1/2 and AKT signal transduction pathways. In order to protect cells from apoptosis induced by oxidative stress, cobalamin induces the pNfkB which in turn regulate the iNOS and HO-1 induction. Cobalamin also induces thepERK1/2 which regulates the induction of Hps72 and Nrf2. And finally, pAKT induced by cobalamin which regulate the Nrf2 and HO-1 induction. The inhibition of any of theses pathways leads to loss the protection. The GSCbl and NACCbl provide a superior protection against oxidative stress, this protection involved induction of the signal transduction pathways and Hsps. To conclude; cobalamin provides protection against cells death induced by oxidative stress. Cobalamin achieves this by multiple pathways which include direct antioxidant stimulation and induction of signal transduction pathways. Different cobalamin derivatives have superior protections. These finding are a useful pharmaceutical tool in the treatment of the oxidative stress related diseases.