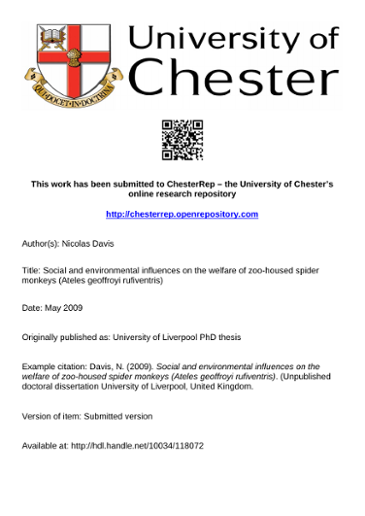 The aim of this thesis was to provide a better understanding of the needs of spider monkeys (genus: Ateles) kept in zoological parks in order to provide an appropriate environment, which enhances the physical and emotional wellbeing of the individuals. This series of studies adopted primarily a physiological approach that entailed measuring cortisol in urine samples collected over a seven year period to assess the impact of a variety of social and environmental conditions. My studies also involved behavioural observations and a questionnaire study to collect information from other zoological parks that maintain groups of spider monkeys. In order to address the aims of my research I first validated an enzyme immunoassay for urinary cortisol which allowed for the activity of the HPA axis to be measured to assess the physiological stress responses in spider monkeys. The first study assessed the impact of visitors on spider monkeys by comparing levels of urinary cortisol collected with visitor numbers and I found an increase in visitor numbers was associated with an increase in cortisol. This was the first time the physiological impact of visitors was investigated and supports behavioural researcher that visitors adversely impact on primates in zoos. The second study I carried out involved a questionnaires to investigate frequency, direction and intensity of aggression in zoo-housed spider monkeys in 55 other zoos around the world. The pattern of aggressions reported indicated severe and lethal aggression was relatively frequent among captive spider monkeys. Adult males were the most frequent actors of aggression and sub adult males were the most frequent targets, contradicting reports from wild spider monkeys. This aggression could be a condition of the management of spider monkeys in the zoos whereby males and normally transferred between zoos contradicting reports from the wild spider monkeys in which females would emigrate on reaching maturity. Next I investigated aggression, reproductive and separation stressors in the spider monkeys housed at Chester Zoo over a seven year period and measured their effects via changes in urinary cortisol prior to, at and following each event. Aggression had the largest effect, with targets and bystanders having the highest levels of cortisol on the day of aggression for severe and lethal aggression, respectively. When examining the reproductive events, cortisol levels were significantly elevated in the mother the week prior to and the day or birth, but were highest for bystander females on the day of birth. In the case of separations, cortisol was elevated when an individual was separated for longer than 24 hours for separations and less than 24 hours for reintroductions. Finally I investigated the replacement of the breeding male in the spider monkeys at Chester Zoo. Although a significant behavioural effect was identified in the adult females, there was little evidence of an increase in urinary cortisol among them. In addition, there were no instances of aggression between the adult males and the juvenile male in the group. Overall conclusions from this study indicate that the group of spider monkeys did demonstrate a varying stress response to a variety of social and environmental stressors associated with elevated cortisol levels and behavioural changes. However, there was no evidence of long term chronic stressors which are normally associated with poor welfare. This indicated that the environmental provided for this particular group of zoo-housed spider monkeys generally allowed for the individuals within the group to cope and adapt. In light these findings the study also makes a number of recommendations regarding the enclosure design, relocated of individuals and the gradual introduction of spider monkeys in zoos. The findings of this study are important as it contributes to our understanding of the physiological responses to stressors in a zoo environment and therefore has implications for animal management. It also identifies potential species specific requirements for the spider monkey that should be considered.